Whats that? Cerebella's PF is ending and shifting to Ms. Fortune's? Oh man get ready then. For this is my first guide!

To summarize the Ms. Fortune Gold Prize Fight, it is one of the most hated prize fights of them all. For the reason of it's modifier. Where if a fighter takes out someone and it was not a crit, the fighter is stunned for about six seconds.

Being stunned for six seconds is pretty brutal. As that leaves the opponent plenty of time to punish you for not using crits.
BUT, do not be afraid! This trustworthy individual is here to help give advice on this Prize Fight! There are ways to handle the modifier. 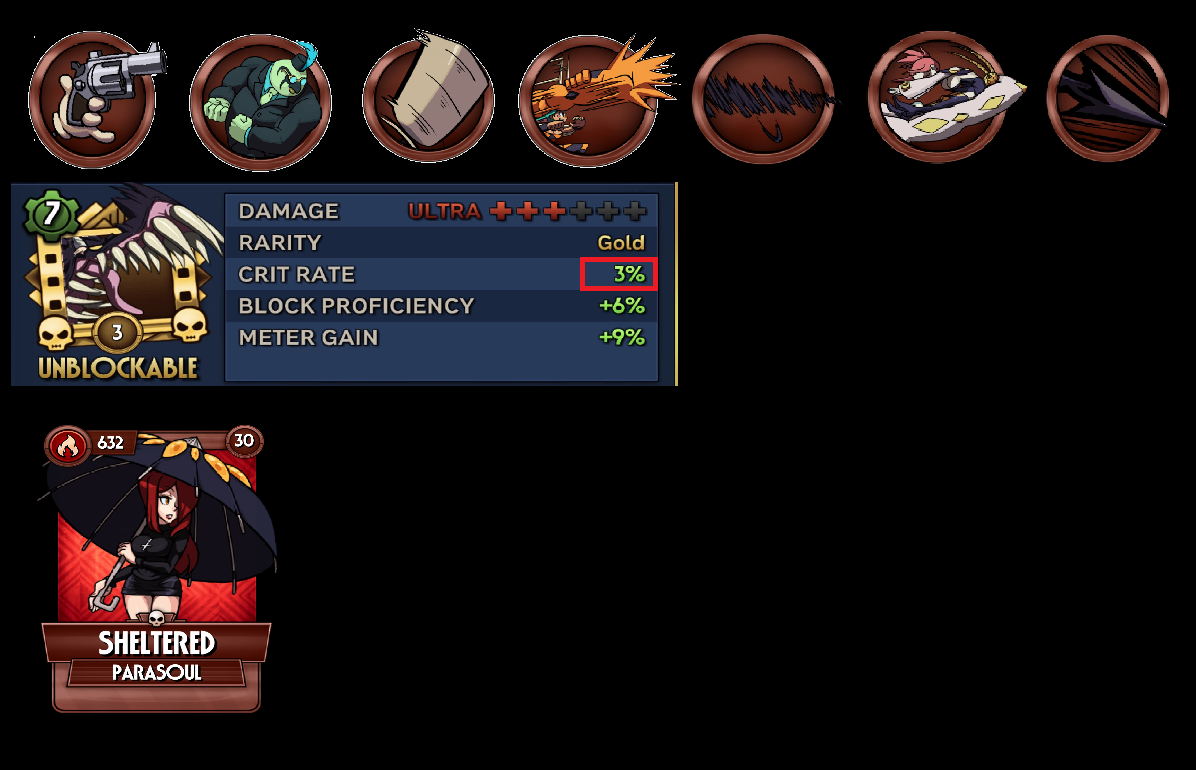 This should be pretty straight forward and obvious.
The moves that have a increased chance to land a CRITICAL HIT are: BANG!, BANG!, BANG!, Dive of Horus, Giant Step, Lock N' Load, Drillationship, Hornet Bomber and Gae Bolga Stinger. These moves are a solid choice if you know how to use them right. Though typically, moves that simply boost you crit rate to your stats are more solid, but this does not mean that those moves are poor choices. If you have them and theres no other option, they're pretty nice.

As I said, any move that either boosts your crit rate or gives stun resist is nice. The Fenrir Drive bb as I showed here will give a boost to your crit rate by 3% when equipped and can be upgraded to potentially increase that.

Sheltered works great both as a support and as a carry in this pf. Cheap, easy to invest in, and provides a 20% crit rate to herself and teammates. Her enrage stacks are what also allow her to pump heavy damage as well. Give her critical mass and she'll tear opponents up no problem most of the time.

Bad Hair Day (Forgot to put her on here rip!) gets an additional crit rate on bleeding opponents which she naturally does to them. Don't forget about her! Otherwise the strategies for her are the same. 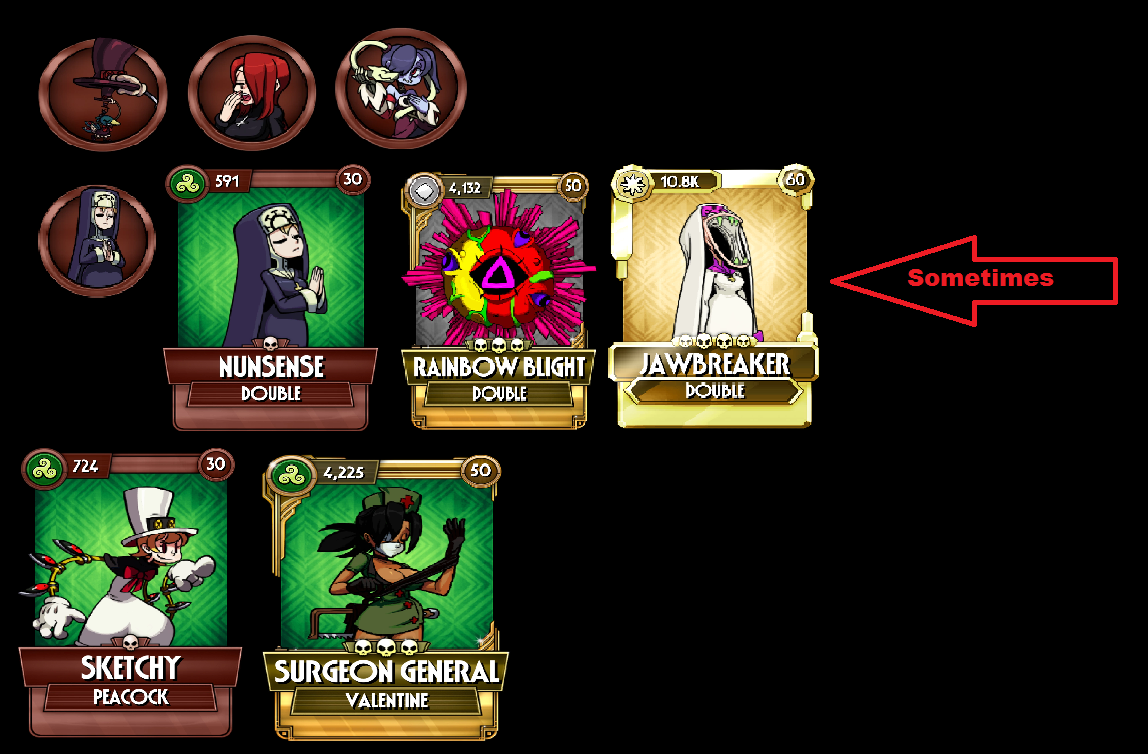 Taunts are probably the easiest way to gain Immunity though they may be inefficient at times. Despite this the taunts can give a pretty lengthy Immunity themselves so there is usually enough time to take out the opponent. Peacock, Parasoul and Squigly's taunts all give Immunity.

Not the most optimal, but @Scorialimit has shown that you can in fact utilize the taunts mid combo! Thanks pally!

Double's taunt has a chance of giving immunity but this is ill-advised. As it's completly rng based.
Nunsense...is surprisingly okay in this pf. Precision stacks count as a buff so she'll very easily gain some buffs, including immunity for that, though she does have a low atk stat so keep that in mind. Rainbow Blight will always gain immunity when she transmutes to the light element. Once again, this in rng based as is Jawbreaker's SA1, so keep that in mind as well.

Sketchy gives immunity on tag-ins though you usally won't be tagging in. However it does fill a good back up plan in case you lose a fighter. She also gives curse and slow. So thats nifty I guess

When it comes to immunity, I personally want to say that Surgeon General is the best out of them. She provides not only a lengthy immunity, but Heavy Regen to. Helping with your survivability. By the time she tags in, she'll have enough to snowball whats left to.

Feline Lucky: Natural gain of three stacks of precision as well as a 2% chance of getting Immunity with Invincibility,Final Stand and Unflinching. A high crit rate Feline Lucky has the potential to do nice but remember that the chances its extremely slim. And her low hp means if rng isn't on your favor. You may suffer for that


Grim Fan: She has to lose health to get her immunity. Nuff said. 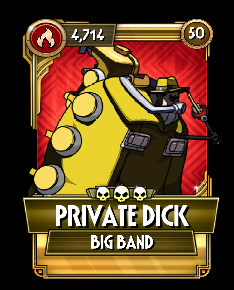 I personally believe this is Private Dick's best Prize Fight. Being one of the best stun lockers in the game. (RIP Parasite Weave) and comes with a natural 50% resist to debuffs. This mean it is far less likely for Private Dick to be stunned as you can potentially also stack stun resist buffing moves on him to make it even less likely he'll get stunned and even if you do, Private Dick is one of the bulkier fights who can take a fair large amount of hits especially when given his Marquee abilities. He may not have the best atk stat but his capabilities to resist debuffs and being tanky enough to take a BB or two is more than enough to make him a solid carry if not, at least a good back up plan if your carry dies.
Still, I highly recommend investing into atk%.

Why did I name this Private Dick and Friends? Well....

Just Kitten - Well, she is a cheaper alternative to Private Dick and she does convert debuffs into precision including STUN. However, were mostly wanting to look at avoiding those debuffs from being proc'd in the first place. It's important to note that Just Kitten does not resist the debuff, just converts it. So more chances of the stun being proc'd is not good. Furthermore if she does get stunned, get ready to be punished as her health is still very low, being a Fortune.

Nyanotech - Iron Man here can gain barrier for headdrones which while active can convert debuffs into enrage. Sounds neat on paper, but you still have a window of time to take the opponent out, and furthermore, Nyanotech's attack is less than Dead of Winter.

ICU Valentines - Technically not a resister, but stun will give them Heavy Regen, being a debuff and all. Still, solely depending on ICU is ill advised.
Of course fighters who benefit from dealing crits or depend on the opponent gaining buffs are always nice to pick. Such examples (I'm not listing all of them!) include:

Any Parasoul really
Dragon Brawler
Parasite Weave
Purrminator
Doublicious
Rusty
A Trauma Center Valentine is pretty useful here. They can potentially save you in late streaks. Guess that Icy Hot wasn't a waste after all ey? XP
What to Watch Out For:
Besides the obvious defenders we all know and love. Take special caution when dealing with these fighters.


Twisted Mettle (Regardless of marquee or not), Any Marquee Painwheel, and Dreadlocks - These fighters will all punish you pretty badly for critting. For Twisted Mettle and Dreadlocks, BloodBath and Red Velvet are considerable options, as they either take advantage of the bleed or stop it from happening. In the case of Marquee Painwheels, I'd highly advise to avoid them at best. But if you must fight one, take a Sketchy with you. Better to have a 50/50 to deal with that grudge than 0/0. If the painwheel does happen to have Tainted Blood, A healing fighter such as BloodBath or Bio Exorcist is a solid idea.
This is the only prize fight I can say that That's All Folks! is a threat. This is where immunity or Private Dick is better over boosting crit rates as she WILL reduce your crit rate by up to 75% as long as she is alive. Avoid her to if you can but if you must, bring immunity or resist characters.
So that concludes the scumbag episode!
Last edited: Apr 26, 2019
Reactions: Yomady, Irghen, BallotBoxer and 11 others

You should do guides on the other modes too.

bestsuperblox65 said:
You should do guides on the other modes too.
Click to expand...

Here's another strategy that's admittedly rather dumb. But if you set an enemy with permanent bleeds with Filia, it's relatively easy to tag in someone to get in the last hit and take the stun that either A) doesn't matter if they die, like a silver you're leveling or B) is extremely hard to kill quickly, like Heavy Metal or Assassin's Greed.
Reactions: Yomady

I made something a bit back on how to immunity taunt mid combo if you'd like it for the immunity section
Reactions: cappatacus and AnimeAccel13

fanghoul said:
Here's another strategy that's admittedly rather dumb. But if you set an enemy with permanent bleeds with Filia, it's relatively easy to tag in someone to get in the last hit and take the stun that either A) doesn't matter if they die, like a silver you're leveling or B) is extremely hard to kill quickly, like Heavy Metal or Assassin's Greed.
Click to expand...

Scorialimit said:
I made something a bit back on how to immunity taunt mid combo if you'd like it for the immunity section
Click to expand...

Went a head and added both in. I think both are pretty good!

Definitely bookmarking this to share when players ask us about this Prize Fight
Reactions: Am_Suitcase

I know this thread has been dead for a while but a brand new option has appeared that breaks a huge hole through this PF: Mean One. The combination of Mean One's SA giving her enrages from opposing Catatonia precision stacks, converting opposing Catatonia precision stacks into timerless debuffs, and the ability to run immunity taunt give her the tools needed to absolutely destroy this PF. Linked down below is gameplay of what a mere gold Mean One with just healing support(and also a backup carry/niche counter for the odd Dread Locks) can do at the 30+ streak level. A diamond Mean One could probably man-handle this PF by herself at 500% stat mods.
Reactions: ZeoW, BallotBoxer, Disasterrr19 and 5 others

Wow, that's like seeing a Double with Chaos MA without requiring elemental advantage or critical hits.

I'd like to note that this PF and Robo-Fortune's PF are still the most "hated" Prize Fights. Currently most Prize Fights' 10% has inflated to 20 million. For Fortune/Robo-Fortune PFs, 10% is 10 million. Despite this helpful guide, it seems most are avoiding them or not grinding as hard as they'd normally would.
Reactions: Am_Suitcase

I put it down as a system where it's one tick off if getting hit, regardless of what's in - just make sure they are strong.