So in the past two weeks, I have finally gotten strong enough to get into the Diamond Prize Fight. Great timing I know.


So what does all this basic data mean?

The exponential growth of scores from the BIG BAND Prize Fight. Since the changes and at the start of said prize fight, there has been exponential growth, while we haven't come full rotation to know just where it will go, it seems to be getting rapidly higher for both TOP 30% and TOP 10%.

Where will this take us? Only the next post from @Sairus to see what the past few prize fights and weekend brings us. Only once we have done a full rotation will we know exactly how big of a change Diamond Prizefight has become.

DISCLAIMER: These are just REALLY rough calculations and guesses given the current times, trends and changes. Since we don't have the most recent score results. Would be happy to actually build a whole data capture for all the prize fights, trends and such recorded if Cellsai is willing to throw data at me.

Well, it sorta becomes a self-fulfilling prophecy; after one falls short of the current PF threshold, everyone goes 4-5M more to be 'safe'.
But I also think the lock-out contributes in some way as thresholds are determined by percentile of the qualifying players, especially in Diamond.

Before the lock out, players could and did play in all 3 tiers but if a player wasn't equipped to handle say Robo's Gold modifier or not have the time, they would bail, but if they scored enough, their participation would add to the percentage pool. But now the pool is split into 4 separate pools and I think the Dia PF is the shallowest 'pool' of players, but with the most concentration of high scorers. If more (all) players were allowed to try the Dia PF, as long as they scored more than 1M (3 milestone rewards), there would be more data points and could shift the percentile thresholds down* (and in this case, most of us are only grinding for the 30%, which no one cared about Pre-Dia PF, it was always 10%).

*the percentile door swings both ways; it also possible around the BigBand PF cited was where many frustrated Dia PF players that kept missing the 30% threshold, went back to Gold PF, which would also raise scores as there are less players in the data pool)
Last edited: Nov 13, 2021
Reactions: Codlugarthia, Disasterrr19 and BallotBoxer

what a beautiful board of data

I was going to make a "The PF Rewards System Has Always Been Bad" thread, but I think this does a good job illustrating the point. Rewards dependent on other players' actions outside of your knowledge or control isn't healthy competition. It just leads to bitter disappointment.

The last 4 PFs were crazy. I expected the scores to dampen as everyone divided their attention between normal PFs and the special Halloween Prize Fight. But it looks it is like evilgordo describes, less participants means less low scores to sink the average. Instead, the supreme players with dozens of level 60 diamond encrusted collections are soaring around with their usual half-a-billion scores, raising the rates.

I don't have the time nor the strength to keep up, so I've gone into cruise control until Umbrella arrives. Get the 12m milestone and bounce. Pointless to try to guess where 30% will end up. Guaranteed it will always be one million higher than where you stop.
Reactions: Codlugarthia, Disasterrr19 and evilgordo

Great job with the tracking thank you

I think its time to look at Milestone rewards rather than percentiles if the cutoff scores keep rising. That said scoring ramps up really quickly in Dia PF so the other key factor is time taken. Getting 65M now in Dia PF still feels like it's quicker than grinding top 10% in the Old Gold. I sometimes hit 2-3M points from a single fight now when theres a mulitplier bounty on the opponents team. They can be VERY tasty indeed.

Seems like not many people are aware of this but here's an excel sheet that is regularly updated and contains ALL data of Prize Fight and Rift cutoffs, including the ones since years ago: 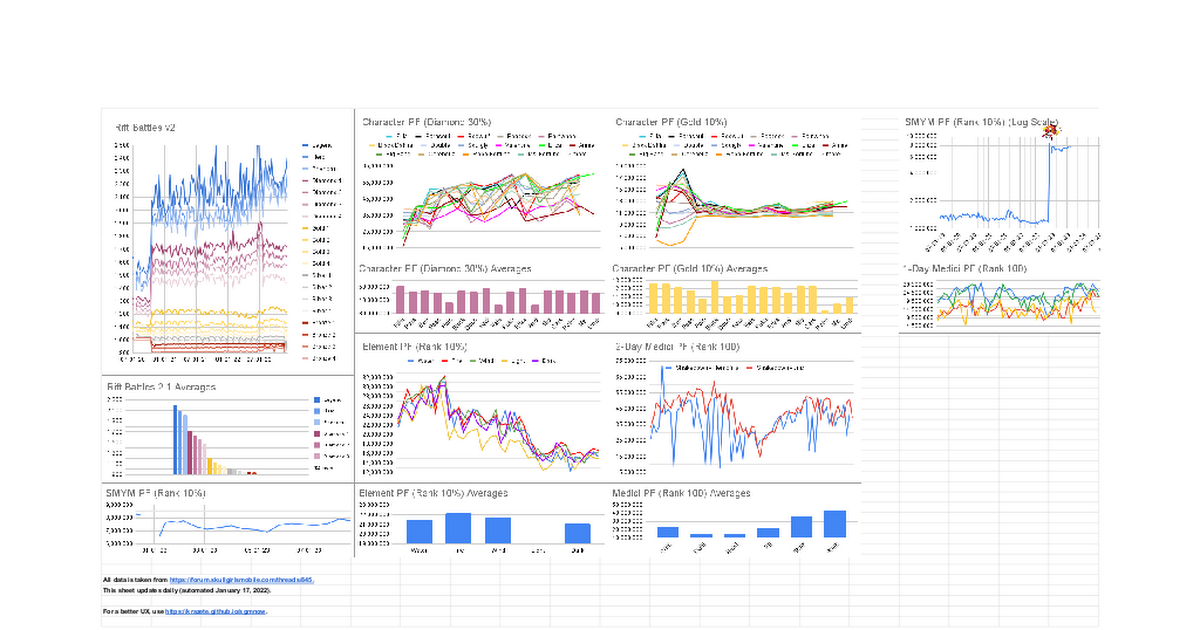 ZeoW said:
Seems like not many people are aware of this but here's an excel sheet that is regularly updated and contains ALL data of Prize Fight and Rift cutoffs, including the ones since years ago:

Well... There goes the rest of my weekend thanks. I live in data so there is that, glad to see people have been keeping track.

I knew about it but didn't really do much digging as it was a quick overview of the recent prize fight trends.
Reactions: Holy Goose and Codlugarthia

Ok, the first 2 PFs results, post-Costume Party, are in. And interestingly enough, both Diamond 30% thresholds are under 30M!
While the 10% scores remained relatively close to the previous 70M range. (It's obvious the only factor at 10% is the new rewards? are they really that much better?)

The 30% is interesting, many factors could have contributed to the decline: Obviously the big difference is no Holiday PF, players that don't have a large, strong roster tend to focus one PF with the 'better' rewards. So, post-holiday PF, what happened? Was there that many players that only focused on the Holiday PF suddenly returned to Dia PF? Did the discouraged players that missed the previous Dia cutoffs go to Gold PF? Was it the characters? I'm guessing Beo/Pea were not super desirable as fighters/fodder? Probably a mix of many factors.

I'm guessing the 30% Dia thresholds now is only a 'soft reset' and will eventually get back to the mid-high 40M's as word gets out that scores are achievable again. But Seasons Beatings is right around the corner... another opportunity to see if the pattern repeats and maybe reassess how one will approach Dia PFs during that timeframe...which in turn becomes a self-fulfilling prophecy again...
Reactions: Disasterrr19 and Holy Goose
You must log in or register to reply here.
Share:
Facebook Twitter Reddit Pinterest Tumblr WhatsApp Email Share Link
Top Bottom