rexturtle1120 said:
Hey look new silvers! If your not up to speed yet, on the Skullgirls mobile twitter account they’ve just dropped some awesome teasers of the new Silver fighters their currently making. Can we just acnolage the fact that we’re getting new silver fighters for a change instead of the previous gold, don’t get me wrong I love gold fighters but since there are pretty hard to get its nice to have some newer silvers for a change. Previously the only fighter with more than two silver variants was squigly, of course this third silver was an event exclusive (but we wouldn’t mind if she replaced Oh Mai valentine in the daily relic)so maybe she doesn’t really count. Regardless the notion still stands.

But enough talk, let’s actuallly look at what these new silvers can do. Unfortunately i don’t actually have any picture yet of the new fighters, but if you watch the video on there twitter account you’ll
know what I’m taking about

The first new silver is Wrestler X Beowulf, sporting a X-men Wolverine skin and the light element.Based on speculation from the short video recived I think his SAs will work a bit like this;

Now this is all speculation but I’d say besides the seconds/percentages, I’m pretty spot on. Overall as a non Beowulf player I might actually use this one

The second fighter we’ve been given so far is Wild Card Peacock, using an apparent Joker skin as well as the fire element.
This Signature Ability is a bit harder to crack but I think I got the overall idea.

Killing Joke
1: Inflict a random debuff(excluding or maybe including STUN or DOOM) every time a special move is used for 8 seconds
2:On Death deal damage equivalent to 50% of your max health

( I went back and looked at the video, I concurred that her SA activates in every Special move instead of on projectiles- it it at least seems to be that way, so I edited her SA a bit) As you can see this SA combines a bit of Immoral Fibers SA into it, that’s fine though as the first part of her SA is somewhat unique. At first based on the video one might think that her SA works like Dread locks Fillia or Painwheels MA where the enemy takes back 15% of there attack? However this simply isnt the case as in the video the Peacock is down to half Heath and the Regally Blonde Parasol (with no means of regeneration) has almost full health.

The third fighter is Myst-Match Double proudly displaying the American pallete (I’m pretty sure) and.... apparently the water Ability? This is weird cause that would mean we have three water doubles and there so already another silver water double, Temple Tyrant, but whatever I won’t complain for new fighters. One person on the Skullgirls Mobile Twitter account commented that her SA and Name kinda makes her like Mystic (Yknow the shapeshifter that’s blue like an avatar) from the X-men series, it would certainly fit our Hero’s/Villains theme. I think her SA would work a bit like this

Shape of Slaughter;
1: Gain the same BUFFs and current duration as the opponent every time Double Transmutates to the opponents element
2: Gain 4-5 stacks of precision on opponent tag out
The First part of The Lady of- oops that’s Eliza’s move. Ahem, the first part of Shape of Slaughter was pretty easy to crack and I think most of the community got it, nice job guys! The second part I had to take an educated guess- it’s not exactly clear in the video but for all we know it could be time based. Regardless I’m definitely using this double, So far its my personal top pick.

The fourth fighter we’ve gotten is Ms.Trial Ms.Fourtune- looking like the Hulk and Conveying a wind elemental I’ve got to say she sure was a surprise. I mean if we can get a silver Ms.Fourtune and she was just realeased then anyone’s possible. Her SA looks like this

Overruled;
1: Gain 4-5 stack of precision on Charge attack hit
2:?????? % chance to remove debuffs if you have precision, gain 1-2 stack(s) of precision
( I looked at the video again and saw that she removed the untouchables unflinching with a charge attack)
In the teaser video we get there isn’t any evidence as to what the second part of her SA is. All the debuffs That are made are caused by her blockbusters so I’m at an overall loss as to what to say- maybe you guys can figure something out. I like this Varient but I’d rather have her name be Ms. Endeavor or something longer than Ms.Trial- other than that everything’s Peachy Keen. All these new silvers are starting to make slightly older players like me get excited to collect all those bronzes and get that free silver relic.

Our fifth fighter so far is Tomb and Gloom Eliza, portraying Raven with her pallete (Yknow The purple girl with dark powers from teen titans or ...shudder... teen titans go) ad well as the dark element. Hers what I think her SA sort of is.

Astral Deflection:
1: Upon triggering shekmet inflict Heal block (or a random debuff) for 10-15 seconds on the opponent
2: % chance to inflict an additional debuff if a debuff is present

In one of my previous posts SAs we’d like to see, I said is like to see an SA kinda like thsi and so I’m still sticking with that. Can’t wait for her.

So that’s all the New silvers we currently have now, if we get more in recent time I’ll make sure to update this list, meanwhile I’m mighty happy to have some new fighters at all, no matter how long it may take to get them.

(P.S as said below I don’t think that fighters like fillia will get new silvers all that soon since Filla just got an elemental relic exclusive gold. The other fighters like Double Beowulf and Peacock didn’t do if we follow the pattern then I think that we’re destined to get Eliza next, Cerebella and maybe a Squiggly since she came out around when the elementals were realeased) EDIT we got a Ms.Fourtune so I guess anything’s possible
Click to expand...

Preeety sure Double is Mystique from X-Men as well, and Ms Fortune is She-Hulk, the underrated 4th wall breaking character. Since you know they want to keep the DC and Marvel thing going on. I have to agree though, pretty excited for these new variants and what they would mean next update.
Reactions: rexturtle1120

The SGM Twitter page just announced the newest silver Cerebella. It is called Toad Warrior and references either Zitz or Rash from Battletoads. Unfortunately the video clip did not show any sort of SA activation, so as of right now we do not know the name or effect of Toad Warrior's SA.
Edit: The video actually had a subtle SA effect. She slowly gains blockbuster meter over time.
Last edited: Oct 18, 2018
Reactions: Chocostix and rexturtle1120

Reshiram18 said:
The SGM Twitter page just announced the newest silver Cerebella. It is called Toad Warrior and references either Zitz or Rash from Battletoads. Unfortunately the video clip did not show any sort of SA activation, so as of right now we do not know the name or effect of Toad Warrior's SA.
Edit: The video actually had a subtle SA effect. She slowly gains blockbuster meter over time.
Click to expand...

Just watched it, really weird but I still got it down- thanks for the reminder!

According to official Skullgirls twitter we will be getting one of these fighters if we participate in the halloween event, and most everyone who participates even a bit should get one. Can’t wait and thanks for joining me in the conversation!

So stoked for this event. Hopefully it is the first of others like it. Can't decide if I should evo my Harlequinn to diamond or wait til after the event so I can use her in matches!
Reactions: rexturtle1120

Actually, what do y'all think about the match modifiers for this event? Will it be completely new ones?
Reactions: rexturtle1120

It’s definitely going to be new ones, if the Valentine’s Day event is any indication of that

It's actually Mystique's colors from the comic 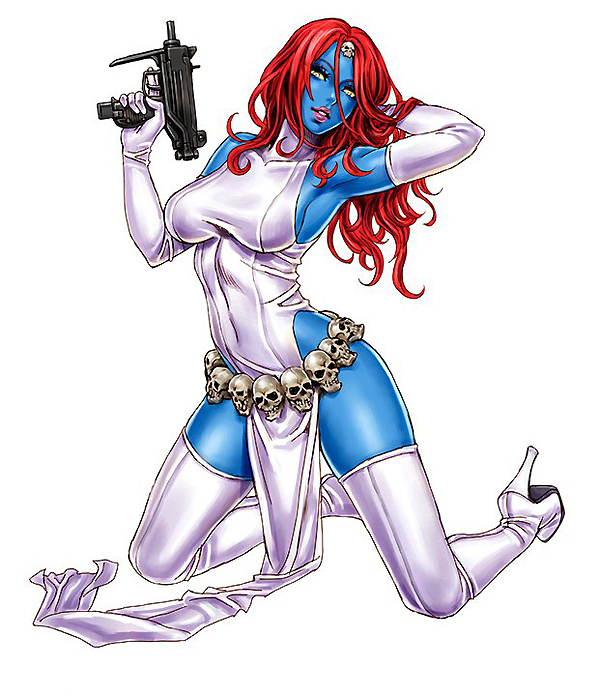 Irghen said:
It's actually Mystique's colors from the comic

Hmmm neat, thanks for the info!

How about TRICK OR TREAT:
If you get hit, you get a stack of PRECISION. However, when you attack, a successful hit gives you 10 seconds of DEATH MARK.
(so both sides get this constant tension of critical damage)