Hungern is going to be Ravenous by then!!!
Click to expand...

I'm happy to have Umbrella in the game. That's where she belongs.
Also, I suppose the background on her picture means that we'll see more of the Egrets

Anyone hungering for updates should see the Steam news page for Umbrella: 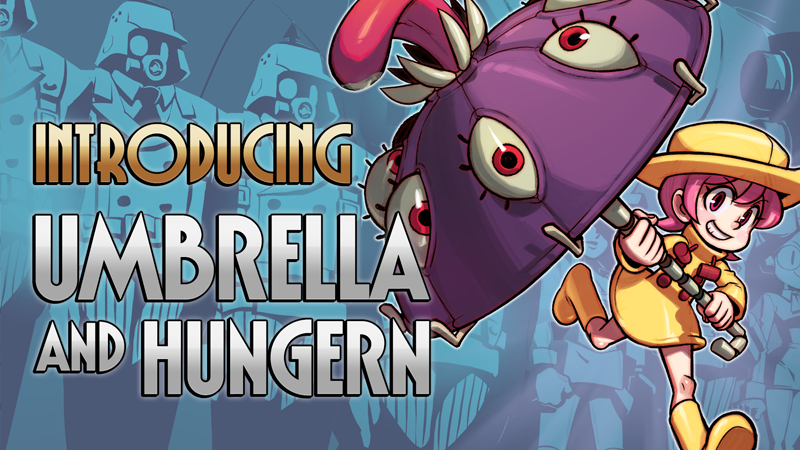 Umbrella section in the forum!

When should we expect Umbrella to appear in SGM? Sometime in the summer, between July and September? Or wait for Q4 (Oct-Dec)?

The running joke that Umbrella keeps getting her spot on the roster taken by other characters is finally over:

Hi Everyone, it's been a while since the last update teased the release of three new fighter variants and Umbrella is still months away. I was just wondering if there was a timeline for releasing the next update 4.8.0 (including more move slots pls

There should be something soon since the the Fireworks Show Prize Fight will be happening a week from now. I hope the new use for duplicates is included:

Hi all. I know the Dev team is working hard on Umbrella and SE but...... i have some questions:

1) Where is Wetwork? What's taking so long to release her into premier relics?
2) I know you are incredibly busy working on Umbrella and SE but could you put out more regular comms on the Forums, twitter and "in chat appearances"? The Dev team seems a little distant compared to when I started playing. I did see Cellsai in chat a couple of weeks back and that was most welcome. Most of what I see posted on SGM twitter is SE related and the forums seem like a ghost town. I've spent nearly 4 years playing SGM and sunk a lot of hours into it. I dont have the time or appetite to play/follow SE too. I think more comms from the Dev team on SGM would freshen things up. Just my opinion.
3) Free give aways for watching streams. Sadly most, if not all of them seem to happen at 2am in my time zone. Could you switch it up for different time zones a little? I need my beauty sleep to keep my inner ugly at bay
4) How would you say you are progressing against the roadmap for 2021? Any idea when the next update is going to drop?
5) New Variants. Has the imminent arrival of Umbrella scared them all away? I want more new variants. I'm sure everyone does. Even the training variants would be fun to play (with no SA's). **Big Hint**
6) Moves capacity. Every relic I get comes with a "Your move capacity is full" warning. I'm having to bin 2/3 moves to make space every pull or PF and have for years now. Its tiresome and frustrating. That said I have tons of space in my Catalyst inventory (I have 50 great gold ones but little chance to use all the ones I have). Could you rebalance that up a little? More Moves Less Cats etc
7) Guilds 'nuff said..... Hehehe

Still loving the game, it's all the personal touches that keep it special. Stay safe, be well and rock on.

Love the 2021 roadmap, but I have to admit that its already October, with only two months of the year left, I would assume most of those changes that haven't received and notes, post or updates too will probably be left in the planning phase.


MightyZug said:
FACILITATING FIGHTER PROGRESSION
Leveling up your Fighters in Skullgirls requires a lot of time, energy, and resources. While some of this is by design (we are a F2P Fighting RPG, after all), there are definitely aspects of it that have proven to be more tedious than originally intended.

As such, to help improve this moving forward, we plan to explore a number of options, including those below:

XP Events - [Note: Only news has been holodeck]
As many of you are already aware, we recently did a test run of a new XP Event called Holodeck Hazards that was very well received. We are in the process of taking all of that feedback into account to make the event more rewarding/viable for a wider variety of players and to determine a schedule of availability that is a little bit less demanding. Stay tuned!

XP Consumables [Note: No news regarding this]
While it can be awesome to get a new Fighter that you’ve been coveting for ages, we know it can be disheartening to know - even with XP Boosts - how long it will be before that Fighter will be leveled up enough to be in a usable state. As such, we are exploring XP Consumables that you could collect and spend to immediately provide significant spikes of XP.

Evolution [Note: News of the Skill Points update. Should be dropping soon, I assume?]
We know it’s common practice for players to level up “food” Fighters that will eventually be used for Evolution so you can wring as many Skill Points out of them as possible. We are exploring revisions to the Evolution process that will render this process obsolete.

Duplicate Fighters [Note: See news of this in tweets, but still not out yet, but probably soon?]
Although we added ways for players to consume Diamond Fighters to beget resources, we are interested in exploring more methods by which Duplicate Fighters can provide more value to your Collection in the future.

DAILY EVENTS & PRIZE FIGHTS
For many players, the vast majority of their time is spent playing one of these two modes, each of which have known points of friction that we’re eager to improve upon.

Daily Events [Note: No news]
While Dailies provide a reliable source of Skill Points, Gold Moves, and Canopy Coins, the process of “mining” the event for those rewards ceases to be compelling as players progress into the mid-late game. We are looking into ways in which players who have established mastery over that content will be able to glean those rewards with far less effort and overhead.
Click to expand...

Overall love the new changes to prize fight and all the rumoured updates, but it has been quite bland in the game for some time, I am still a new player but its getting to the point where all these updates would be game-changing should they be implemented.
Reactions: Codlugarthia

I'm actually pretty burn out atm since 90% of my game time is dedicated to leveling fodder instead of focusing on building my actual fighters.
Reactions: Holy Goose, Codlugarthia and evilgordo

Codlugarthia said:
I need my beauty sleep to keep my inner ugly at bay
Click to expand...

Thanks for this line. I'll save this for my personal use.
Thanks

Am I over-hyping myself?

even just one of those would be awesome

As for Filia and Fukua, Blimeylimey's ultra mega-flex achievement of Diamond-evolving ALL fighters made me realize Filia and Fukua are the only characters with 11, while everyone else has 12 variants.
Reactions: Holy Goose and NamelesstheBeardless

Am I over-hyping myself?

even just one of those would be awesome

As for Filia and Fukua, Blimeylimey's ultra mega-flex achievement of Diamond-evolving ALL fighters made me realize Filia and Fukua are the only characters with 11, while everyone else has 12 variants.
Click to expand...

Is Umbrella's animation work completed? I find it unlikely she's going to be released this year, that would be a really big achievement. Happy to be wrong about this though!

Also, I'm personally hoping for daily event rework to be squeezed in there.

ZeoW said:
Umbrella's animation work completed? I find it unlikely she's going to be released this year, that would be a really big achievement. Happy to be wrong about this though!
Click to expand...

You were right.
Sadly