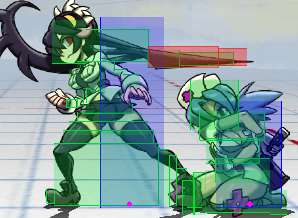 Looking for the finer details on how attacks interact in Skullgirls Mobile? Perhaps even... the FRAME DATA? Look no further!

You can find the frame data for Skullgirls Mobile version 4.1 in this spread sheet:

* You can use the character tabs on the bottom to look at different characters! *

WHAT IS FRAME DATA?


Frame data refers to detailed information about attacks in fighting games. If you want to know how quickly you can act after blocking an attack, or how much time you have to act before your opponent recovers from one of your blows, frame data can tell you.

Note that this is an advanced concept. For those players who are (or are aspiring to be) fighting game connoisseurs, this is probably for you.​ 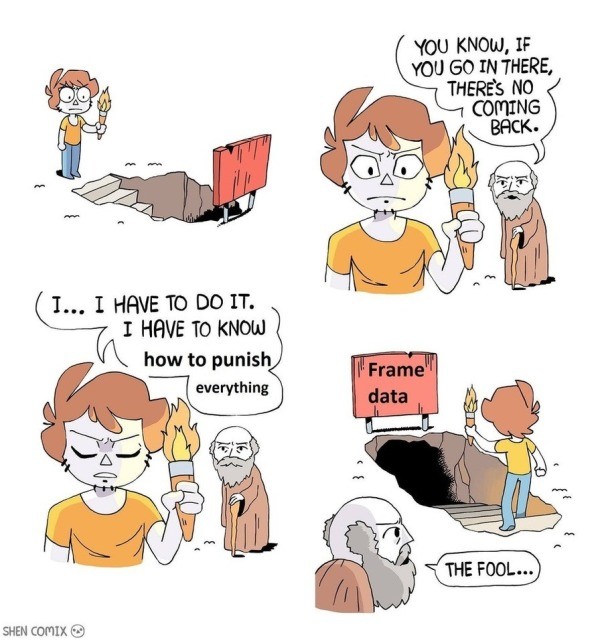 
If a move is +2, it means that when the move is complete, and the character performing the move is back in their IDLE state, they can perform actions 2 frames before the opponent can.

We use frames as measurement of time in fighting games. Since most fighting games run at 60 frames per second, you can assume that 1 frame is 1 / 60th of a second.

Performing an action two frames before the opponent might not seem like a big deal, but those short two frames can be the difference between letting you start another attack to hit the opponent before theirs can hit you.

If an attack is +10 for example, you can perform actions TEN frames before the opponent can once your attack finishes. That's a lot of freedom! You can use that time to begin running away, start a dash attack, or even land a throw.

As you can probably guess, when an attack is +0, it means that you and the opponent recover at the same time when the attack finishes.​
WHAT ABOUT -2, -20, -14, ETC. WHAT'S THAT MEAN?

If your attack is -2, then you likely won't be able to fire off an attack and have it land before your opponent can do the same to you.

If your attack is -10, then your opponent has enough time to start an attack and hit you before you can do ANYTHING, including blocking. This is how moves are "punished", which is something that most players are familiar with.

Now that we understand this better, let's take a look at an example with Double's frame data:

Notice that Double's L2 is +2 for her "Hit Advantage". This means that if Double lands her L2 (second tap attack), she recovers two frames before her opponent. Don't try and sneak in an attack after getting hit by this move!

On the flip side, her "Block Advantage" for this move is -2. This means that if you block her L2, and the move fully finishes, she will recover after you.

Note that this doesn't mean it's always safe to attack Double after blocking her L2, because this move can also be cancelled into another attack, like L3, launcher, trip, or a Special Move or Blockbuster, before the move has fully finished.​
HOW FAST IS <SOME MOVE> IN SKULLGIRLS MOBILE?


As you can imagine, different moves take a different amount of time to perform their hit. Launchers take a longer time to swing and start an attack compared to faster tap attacks for example.

At the moment, the speeds of these moves are not recorded in the frame data sheet. I will do my best to update the sheet with the speed of the listed attacks when I can.

The most important one to know is that is each characters first tap attack (which we call L1) takes anywhere from 5 to 9 frames before it hits the opponent. That means that a move which is -4 for example should be safe from all of the opponent's L1 attacks!

The more negative your opponent is after having their attack blocked, then the more time you have to hit them with an attack before they can block. For example, some Blockbusters can be over -100, which means you can hit them with just about anything before they can defend themselves. Moves that are less negative than that should be punished with fast moves, like L1s. Since Skullgirls provides a very generous "buffer" window where your attacks will come out as soon as possible even if you input them early, hitting characters during these punish windows isn't as tight as you would think.

To be clear: Just because a move is negative / minus on block, it doesn't mean that it can always be punished! A move has to be very negative in order to be truly unsafe and punishable.
​
WHAT ABOUT HITBOXES?

Just click the View Hitbox link beside any move featured in Skullgirls Mobile.
Here's an example of how to get the hitbox on Peacock's Dash Attack from her page.

If you're curious what each hitbox color references:

RED - This known as a true "hitbox". These red areas represent the area that the attack is hitting in.

GREEN - This is a known is a "hurtbox". If a character's green hurtbox is overlapping with the opponent's red hitbox, then they are HIT. If your green hurtboxes avoid their red hitboxes, then you won't get hit!

BLUE - A little more advanced, but this is usually known is a the collision box or push region. If two characters have their blue boxes overlapping, they will be pushed away from each other until they are separated. This is what prevents you from walking through the opponent, and provides a feeling of physical space that characters occupy. As you can imagine, Squigly's blue push box is much thinner than Big Band's extremely thicc one.
​
Any other questions about these concepts? Tag @Liam and I'll do what I can to respond.
Last edited: Jan 15, 2020
Reactions: Cartouche‼, Edge End, Mornedil and 18 others

I am going to study this form like it's a job now.

Location
t-poser jesus land (but to the south)

consarn said:
i almost thought it was a completely different hitbox system
so there's no excuse for cv's insane hitbox other than mikez being insane
Click to expand...

Since Counter Venom in Skullgirls 2nd Encore is used as a counter, the follow hit (where she injects the needle) is intended to never miss, and it all happens during a cinematic counter animation. That's why the hitbox is so amazing in SGM.

(We've talked about reducing the hit region for that move before in mobile only, though...)

like is not enough for this thread,it deserves a love button! tysm !
Reactions: Diony and Liam

Location
t-poser jesus land (but to the south)

Liam said:
Since Counter Venom in Skullgirls 2nd Encore is used as a counter, the follow hit (where she injects the needle) is intended to never miss, and it all happens during a cinematic counter animation. That's why the hitbox is so amazing in SGM.

(We've talked about reducing the hit region for that move before in mobile only, though...)
Click to expand...