Anyone got ideas for cards based on Sml and SMG4
Example I had for SML:

Some more palettes. Also, I decided that if I make a Double card that uses her in Nun form, I'd also make a version with her blob form to show the color scheme. Enjoy!
"Forbidden fruit is the most tempting." - The Life Gem
SA: Undying
SA1: Get regen for 6/8/10 seconds when using a blockbuster. Health healed by regen is also healed on benched teammates.
SA2: When dead, 15/20/25% chance when an ally is hit near Ms Fortune's body to get regen and blessing for 15 seconds. Ms Fortune resurrects with 20% health when the enemy uses a BB3.

"Let all that you do be done in love." - Mother Teresa
SA: Fresh Start
SA1: When Double is a light element, get blessing every 15/12/10 seconds. When Double becomes a water element, transfer all buffs from the opponent onto Double.
SA2: Take 5% less damage for each buff Double has. Upon death, give the next teammate who tags in 3/4/5 stacks of blessing.

"Baby, we have bad blood." - Crona (Soul Eater)
SA: Frizzease
SA1: Inflict bleed on the opponent for 5 seconds after losing at least 25/20/15% health. Also get regen for ten seconds when bleed is inflicted.
SA2: Once per match, when a hit would be fatal, get two stacks of thorns and final stand for 10/15/20 seconds.

"I feel stoned and alone like a heretic..." - Medusa Gorgon (Soul Eater)
SA: Toxic Wasted
SA1: When using Wyrm's Tail, remove 0.5/1/1.5% health from the opponent every second and get unflinching for five seconds after using it for three seconds.
SA2: For every 15% health lost on either side, inflict power surge and heal block on the opponent for 10/15/20 seconds. All power surge and heal block are removed when Squigly dies.

"It's the suspense that gets me." - Bendy and the Ink Machine's art style
SA: Black Rain
SA1: Using a special move or blockbuster inflicts slow for 5/7/10 seconds.
SA2: Inflict a random debuff every 5/4/3 seconds on the opponent when the opponent has slow. All debuffs are removed from the opponent when all slow is removed.

Hey new to the forums, and after seeing someone's Satori I thought.
"Hey? Why not make my own custom, it will be a good first!"
So I did.
It's not the best because it is my first and I did it on my phone, but I tried and think it looks decent!
I wanted to use Cerebella at first but then decided on Parasol because of the smooth hair, also please ignore how bad the numbers and letters look... the quality fucks up when I make them bigger via transform.
Also pls no bully on me making her a gold, the colours just look nice with her colour scheme, and I really didn't want to use bronze, and no bully about me colouring in spots of her hair where her original doesnt have hair..

Also the power is 666 in relation to the theme in Joyful 666 Deluxe Kill Chop, and not because I'm an edgelord... but the 35 is just there because.
And the custom name is in reference to buddy disliking her dads, Brad and Yado.
Sorry kind of a long off topic post?? But I tried sorry
I kind of forgot how to put in images nicely without fucking it up so I just went the safe way and uploaded it to the site.

Neutrals inbound! I decided for a fifth palette, I would remake one of my first palettes, which doesn't look good to me now. I also gave it an SA this time around, so, as always, enjoy!
"You'll float too." - Pennywise (IT)
SA: Shoot To Frill
SA1: Every 20/15/10 seconds, inflict bleed on the opponent.
SA2: When the opponent first gets 4/3/2 stacks of bleed, Double gets final stand and regen for 20 seconds.

"A sound soul dwells within a sound mind." - Franken Stein (Soul Eater)
SA: Soul Survivor
SA1: When a teammate is defeated, get 15/20/25% meter for all blockbusters.
SA2: Teammates resurrected with Forbidden Procedure get 3/4/5 stacks of blessing and regen for 15 seconds.

"Today's the happiest day of my life." - Wedding gown
SA: Deflowered
SA1: Spawning a tear gives 5/7/10% meter for all blockbusters.
SA2: When one of Parasoul's blockbusters is ready, get regen and inflict wither for 5/7/10 seconds.

"Hands off!" - Iron Golem (Minecraft)
SA: Real Steel
SA1: Get one stack of enrage every 3/2/1 second(s) when not on the ground. Enrage stacks are removed five seconds after hitting the ground.
SA2: If one hit does more than 25/20/15% damage to Big Band, get one stack of armor for 10 seconds. Can't lose more than 30% health per hit.

"Get down with the sickness!" - Mikan Tsumiki (Danganronpa) [Redone]
SA: Heroine Overdose
SA1: If the opponent has more than 5/4/3 buffs at once, inflict stun for five seconds.
SA2: If the opponent gets a buff while stunned, duplicate that buff. 5/7/10% chance for all hits to make buffs (excluding invincibility, final stand, evade, and blessing) permanent.

I'm back with some more custom cards! Hope you guys like them!
References down bellow! 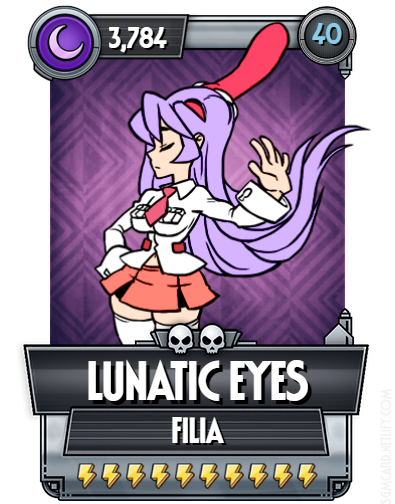 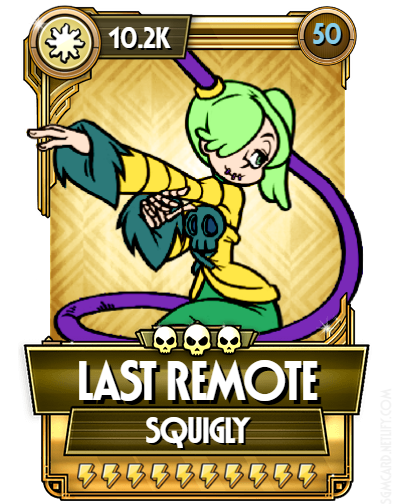 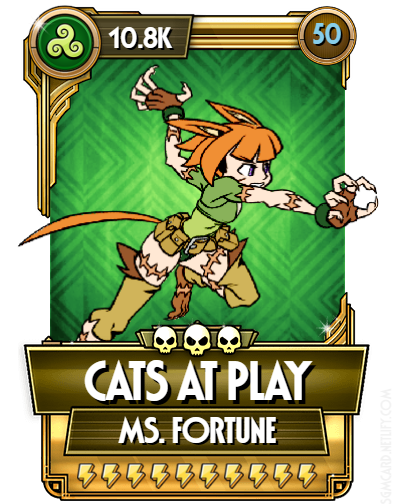 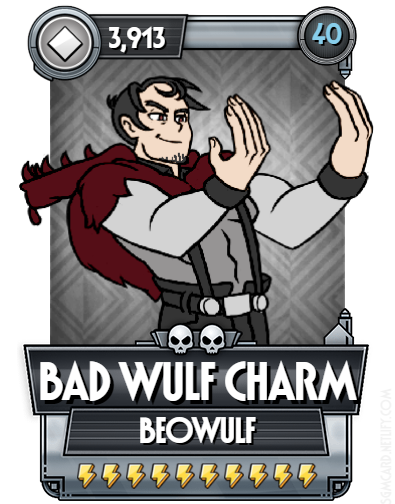 - Reisen Udongein Inaba (Touhou)
- Koishi Komeiji (Touhou)
- Lethe (Fire Emblem)
- Qrow Branwen (RWBY)
If you didn't know already, all of the variant names are references to the respective character's theme song (well, you can arguably say that the title "Last Remote" isn't actually Koishi's theme. It's technically the name of the song that plays during the extra stage of Touhou 11: Subterranean Animism.)
Reactions: lothorie, Mentos, cappatacus and 2 others

Finally found some time to upload these ones. They are waaaay overdue.
This set is based off of the Cartoon Network show "The Powerpuff Girls":

Now for some sarcastic cards:

Mixtape Coyote is an inside joke, but I was too proud not to upload it here
The second one needs no introduction, however...
Reactions: soraray, Luxanna, lothorie and 4 others

Reactions: palti, Nfawkes, Nefarious and 12 others

This idea just popped into my head: Why not combine my favorite line of dolls with my favorite fighting game?
And thus, Skullgirls Monster High was born:

Final set for today
If you don't recognize the characters, you didn't have a childhood:

Eliza as Yzma and Beowulf as Kronk from the Disney movie "The Emperor's New Groove". AKA the best movie ever made
Reactions: palti, Nefarious, Veeko and 6 others

Eliza as Yzma and Beowulf as Kronk from the Disney movie "The Emperor's New Groove". AKA the best movie ever made
Click to expand...

“Oh yeah, it’s all coming together.”
Reactions: Veeko and moomouse

You are my favorite human
Reactions: Whispy

SnowflakeRibbon said:
I'm back with some more custom cards! Hope you guys like them!
References down bellow!

- Reisen Udongein Inaba (Touhou)
- Koishi Komeiji (Touhou)
- Lethe (Fire Emblem)
- Qrow Branwen (RWBY)
If you didn't know already, all of the variant names are references to the respective character's theme song (well, you can arguably say that the title "Last Remote" isn't actually Koishi's theme. It's technically the name of the song that plays during the extra stage of Touhou 11: Subterranean Animism.)
Click to expand...

Oh, this is so epic, but why Inaba is silver, she should be Diamond as well xD

lothorie said:
Oh, this is so epic, but why Inaba is silver, she should be Diamond as well xD
Click to expand...

Honestly, I didn’t really think much about what rarity should she be in. I just thought that silver looked nice on her. It’s not really supposed to be realistic after all. Same thing with the other cards I made.

Little later than usual, I was a little busier than usual today. Anyway, time for palettes!
"Pain is hilarious!" - Bill Cipher (Gravity Falls)
SA: Phantom Pains
SA1: When losing 40/30/20% of health, get one stack of barrier and 1/2/3 stacks of evade.
SA2: Projectile hits heal 15/20/25% of damage dealt and remove 3% meter from the opponent's blockbusters.

"Twice the arms, twice the power!" - Machamp (Pokemon)
SA: Flex Appeal
SA1: Throws deal 5/10/15% more damage for every debuff on the opponent.
SA2: When either side uses a blockbuster, get unflinching for 5/7/10 seconds and the opponent gets cripple and one other random debuff for the same amount of time.

And now, time for some RWBY palettes.
"Love of two is one." - Ruby Rose (RWBY)
SA: Quick Silver
SA1: When dodging an attack, get 3/4/5 stacks of precision. 10% chance to avoid all blockbuster hits.
SA2: Precision hits have a 25/35/50% chance to inflict hex and bleed for ten seconds.

"Banzai!" - Blake Belladonna (RWBY)
SA: Alley Oop!
SA1: Get one stack of precision every ten seconds. Precision hits have a 5/10/15% chance to inflict curse and cripple for ten seconds.
SA2: Every time the opponent is inflicted with a debuff, get 1/2/3 stacks of precision and one stack of evade.

"Hotter than the sun in the middle of July." - Yang Xiao Long (RWBY)
SA: Semblance of Sanity
SA1: If a single hit does more than 25/20/15% damage to Cerebella, get 1/2/3 stacks of barrier for five seconds and permanent enrage.
SA2: If Cerebella gets five stacks of barrier, disable the enemy's tag-ins for 5/10/15 seconds. When the enemy's tag-ins are disabled, Cerebella gets immunity and heals 1% health every second.