Which bronze and silver characters are worth evolving?

I'm not sure how wide the stat disparity is between max level gold and silver characters. I've also seen wide stat disaprities between same-leveled characters of the same type and rank, seemingly based on the power of thwir signatures (Hair Apparent and Bad Ms. Frosty).

BUT, based on their signatures, it seems some would make up for it.

Characters with Disability on critical hit (Bad Ms. Frosty Filia, No Egrets Parasoul) are seemingly super powerful. They keep the opponent from using Burst moves and make it safer to punish them on recovery. Even with horrible stats, I'm betting on them being powerhouses at Gold. They're also your only means of dealing with unblockable blockbusters once the meter has built.

I've been COMPLETELY decimated by a Heavy Reign Parasoul (gains Blockbuster meter on critical hits given+recieved) with a mediocre fighter score in Prize Fight mode. She was loaded with blockbusters, including 2 unblockables. Considering the frequency of critical hits and the fast charge rate of meter, even with only 1 node for each of her signature abilities, she seems mega strong.

I've seen someone vouch for Blood Drive Painwheel, but since Painwheel has the lowest average HP of the cast, doesn't that make her signature too risky? Bleed effects are also more powerful the longer you can keep characters in, so it seems this signature would go better on a low-power, high-HP character with slower moves.

What's everyone else think? Got some bronze and silvers you're looking out for?

Any elaboration on those and why similar silvers are less valuable? Like, enrage is super powerful, but isn't Rage Appropriate's requirement kinda steep?

fatfursatan said:
Any elaboration on those and why similar silvers are less valuable? Like, enrage is super powerful, but isn't Rage Appropriate's requirement kinda steep?
Click to expand...

Uh, I guess I'm most curious about Rage Appropriate Painwheel. Is that based on experience with the character or theorycrafting? How long does the Enrage buff last once you get all 3 nodes?

My level 30 Headstrong Cerrabella, bronze is at 1'000 while my Rusty Painwheel is 28 at 749. Cerrabella seems to be a very strong character in this game. Although evolving her would take some time. Make sure you have enough characters to level her up when you get her to silver though. Cause it's gotta be worth it.

fatfursatan said:
Uh, I guess I'm most curious about Rage Appropriate Painwheel. Is that based on experience with the character or theorycrafting? How long does the Enrage buff last once you get all 3 nodes?
Click to expand... 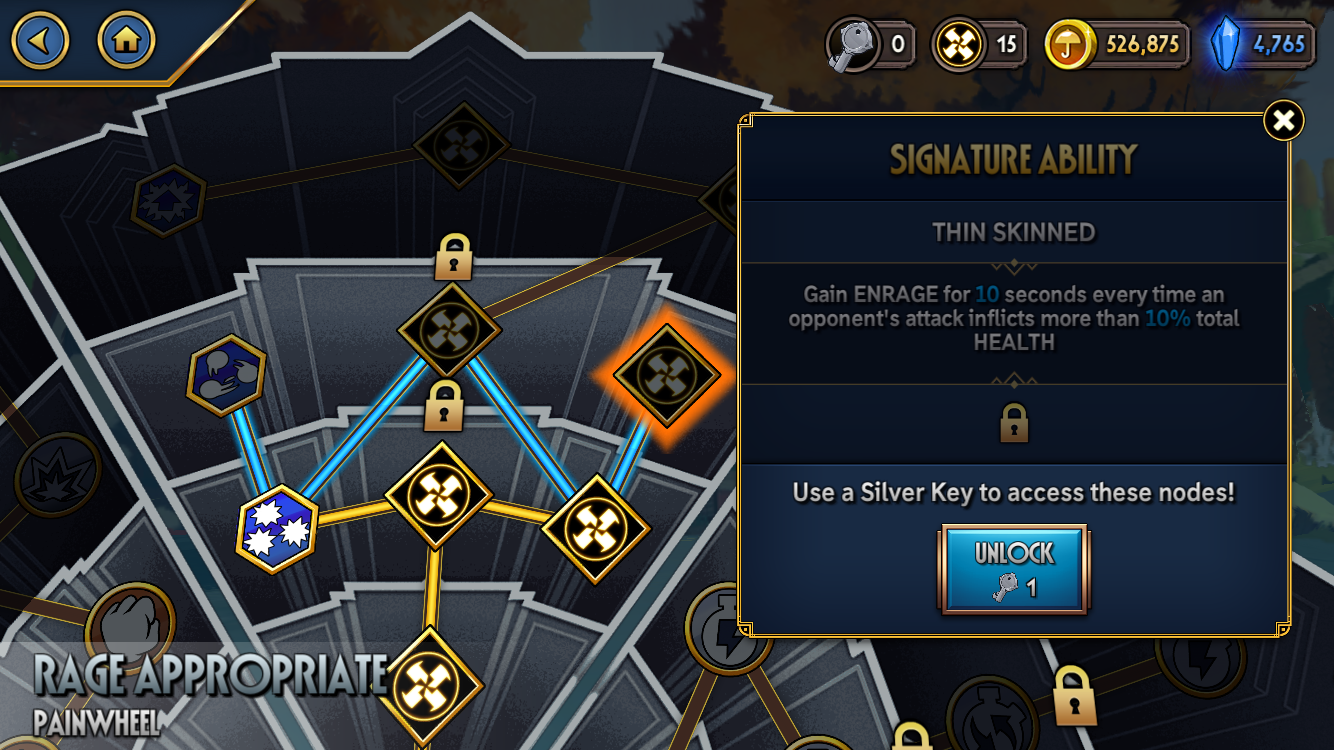