Liam said:
As you've probably heard by now, our current tentative release date is 11/15.
This is the planned date set by LINE, so we all have our fingers crossed that it doesn't change.

If anything changes, (probably even if everything goes according to plan), we'll be back to keep everyone in the loop.

Again, we really appreciate everyone's patience while we get this update out!
Click to expand...

We've submitted the builds to LINE QA for review.
Once those builds pass and are good to go, we can send em off to Apple for the final check!

Once we nail down a more solid date, we'll post another update.

As always, we really appreciate your patience while we get these updates out!
Click to expand...

The new 1.6.0 update will be going LIVE in early November - notes on what you can expect below!

STABILITY AND PERFORMANCE OPTIMIZATIONS
Made significant changes under the hood to how projectiles and other texture assets are allocated, significantly improving performance and stability (especially on lower end devices), particularly during high intensity moves like Big Band’s BB3 Strike Up The Band. 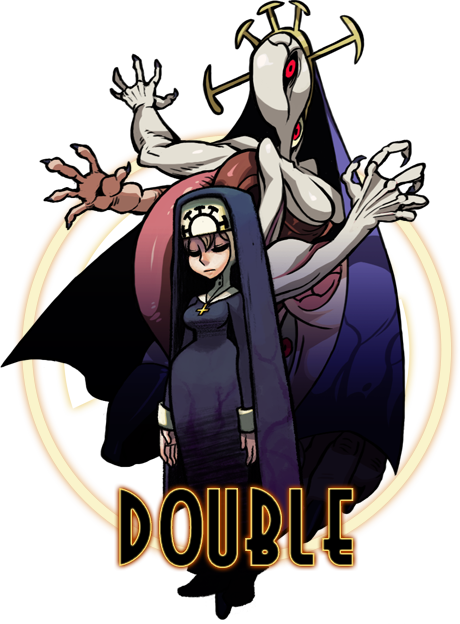 Double’s origins are a complete mystery. Seemingly without a will or motive of its own, this formless monster aids the Skullgirl.

Double is capable of transforming its nightmarish form into that of any person, but often appears as a smiling nun. It can frequently be found in the Grand Cathedral of the Divine Trinity, listening to confessions and attending to the catacombs beneath.

GAMEPLAY OVERVIEW
Double is designed as a technical, opportunistic character - high damage and low health, she uses her TRANSMUTATION Character Ability to adapt to different scenarios in battle and turn them to her advantage!

CHARACTER ABILITY - TRANSMUTATION
After BLOCKING without being hit for 1 second, Double will switch to a new random element. In addition, Double’s Elemental Advantage is increased, and her Elemental Disadvantage is decreased.

NEW DOUBLE FIGHTERS!
Double will have 7 new Fighters available via the UNSPEAKABLE RELIC, available every Friday (along with her Daily Event). 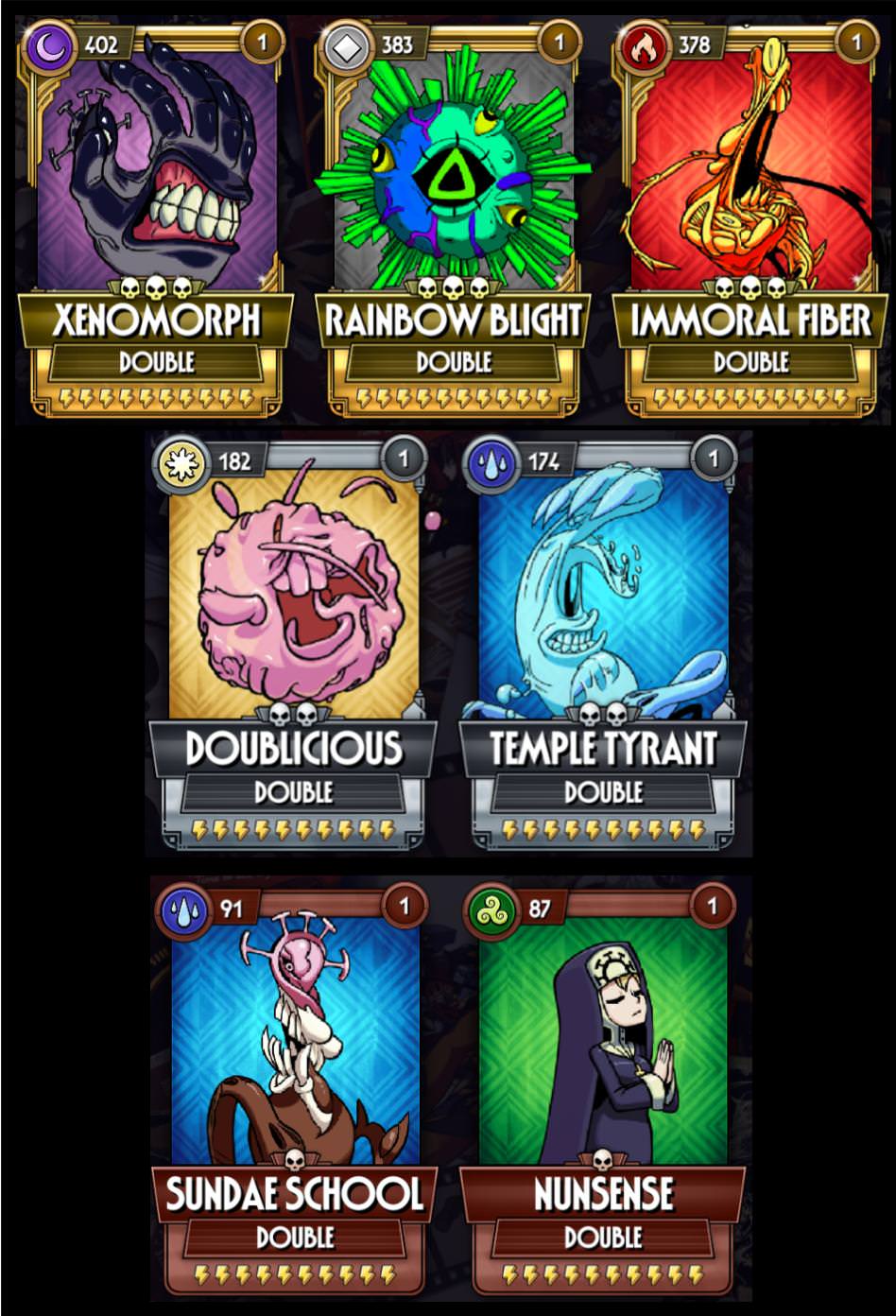 NOTE: Each of these Fighters are at Level 1 with NO Skill Tree upgrades.

FIGHTER DETAILS & SIGNATURE ABILITIES
For more details on these Fighters and their Signature Abilities, stay tuned to our Twitter, Facebook, and Instagram accounts -- we’ll reveal more clues about them as we approach the 1.6 update! We will update this post with new data as it is released.

In the meantime, if you want to speculate about the new characters, you can go to their dedicated Forum post threads below:
DOUBLE MOVES
Double has a wide array of moves that include glimpses into some upcoming, yet to be released characters! 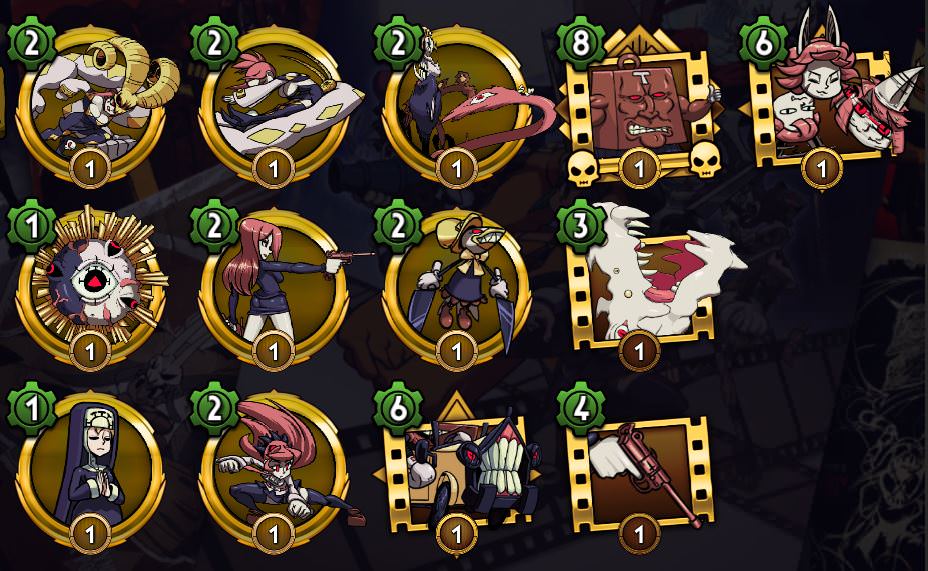 You will be able to get Double’s Moves from ANY MOVE RELIC (and Double’s Daily Event) as soon as 1.6.0 goes live.

NEW DOUBLE PRIZE FIGHTS!
There will also be a set of 3 new Double Prize Fights that will be going live soon after launch. We’ll update this post once the actual dates have been finalized! 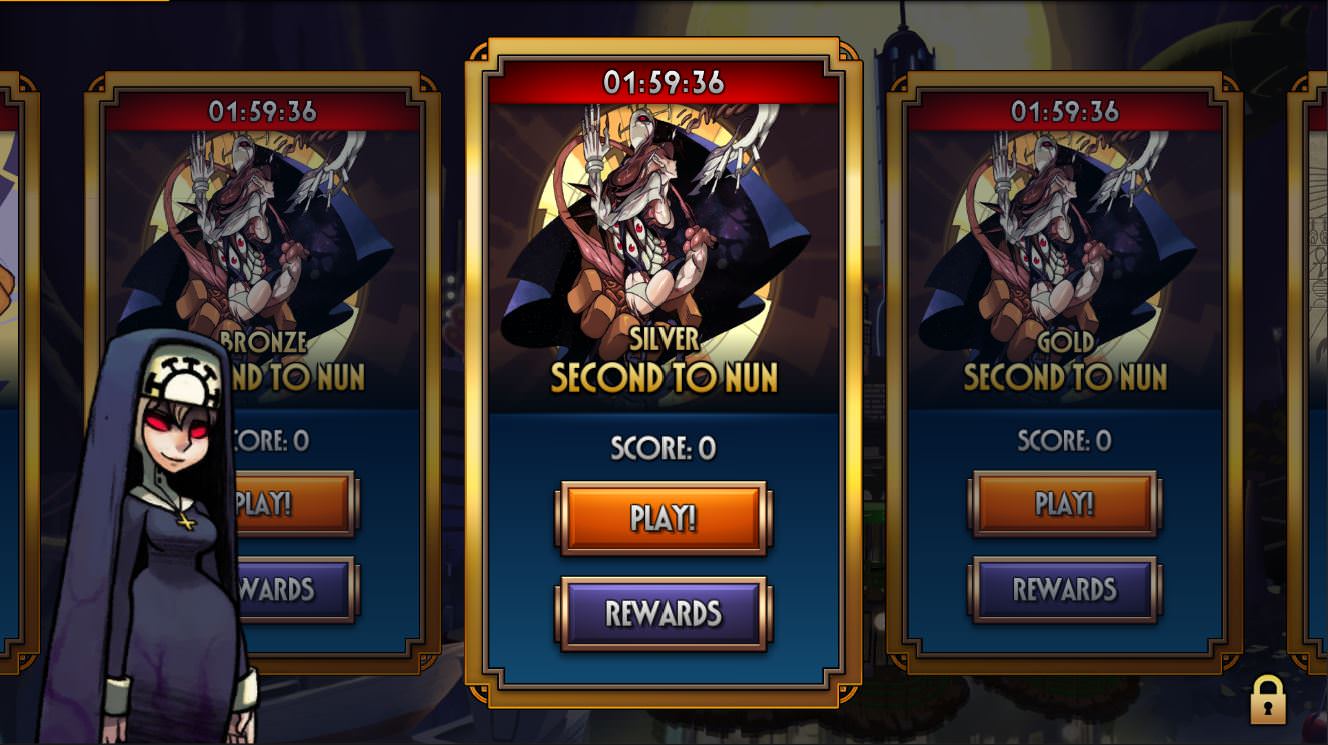 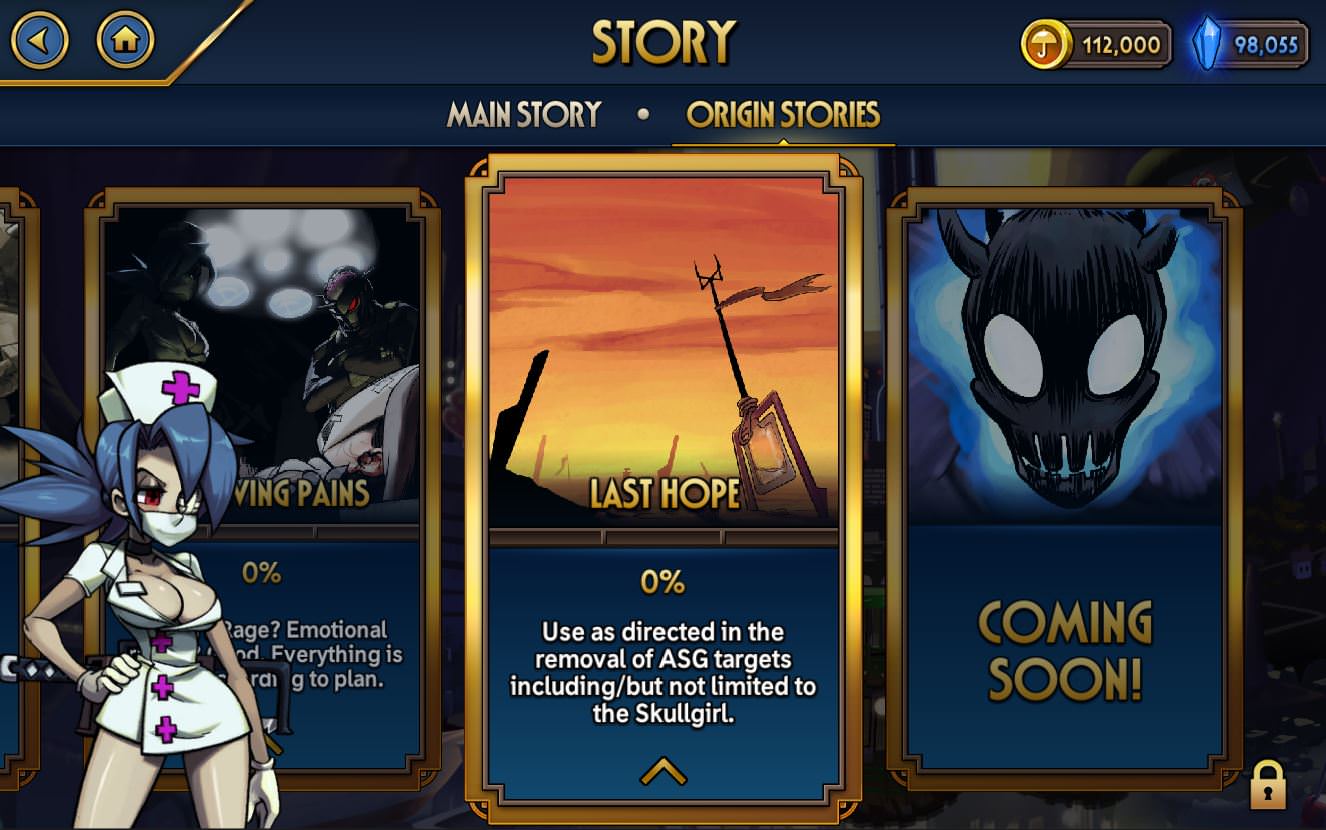 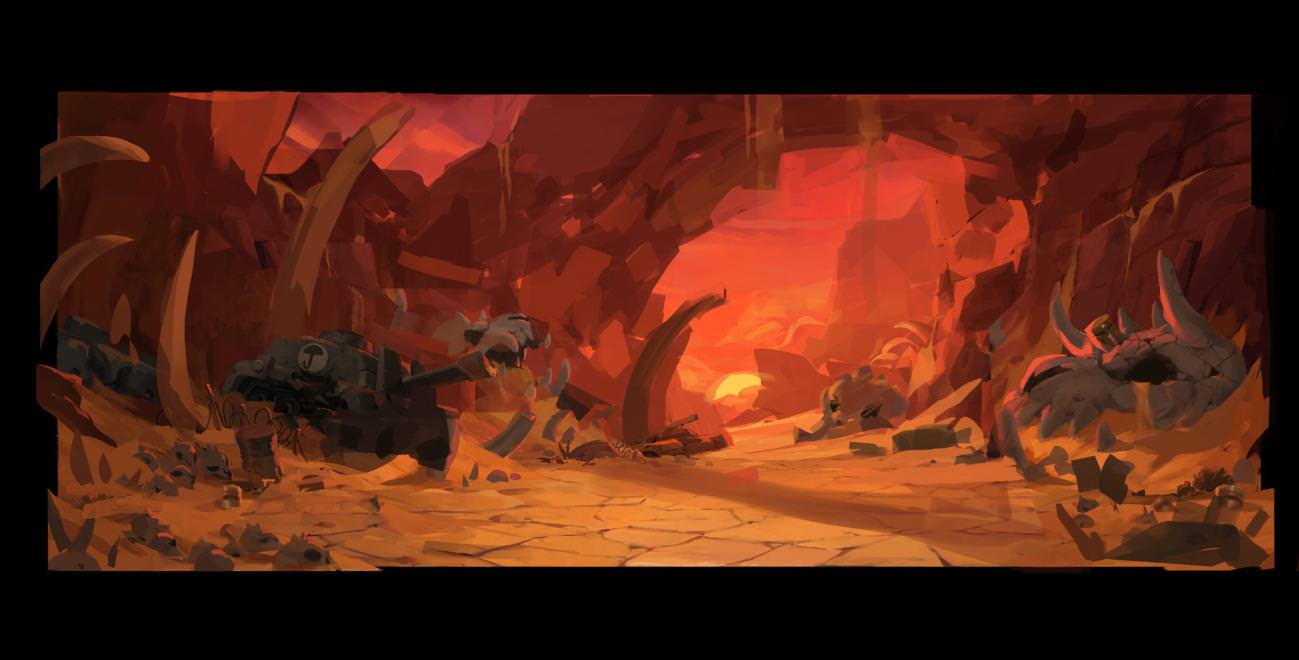 PRIZE FIGHT SNAPSHOT TEAM LOGIC UPDATE
Now, instead of ONLY overwriting a player’s “Snapshot” team in a Prize Fight if their new team has a higher FS, we will also overwrite the team if the new team FS is within 25% of the FS of the current Snapshot team.

CHARACTER SPECIFIC UPDATES
ENEMY AI UPDATES
GENERAL COMBAT UPDATES
NOTE: All these changes apply to players as well as AI opponents
UX IMPROVEMENTS
OTHER FIXES & IMPROVEMENTS
As always, please share your feedback about what changes you like, and what you’d like for us to add next. We’re listening!
Last edited: Nov 14, 2017
Reactions: Luke, Spark Shark, LemonTea27 and 10 others

Cool beans. Thanks for all the hard work you guys put in!
Reactions: Boogiepop, LemonTea27, moisterrific and 1 other person

Oooh I wasn't sure if that tweet earlier meant No Man's Land was a new stage or not! That's a great addition! (It also solves the mystery of where Marie got her big ol' gigan skulls in console SG)

Element switching is a neat thing. Really curious to how that shakes out in gameplay! I also love how Double's card designs are so ridiculous.
Reactions: MightyZug

Looks like we have to Prepare for Trouble! Hidden Variable has just made it Double!

Elemental switches on the fly seem like a fun idea, meaning you have a chance to take on any fighter in the game with little fear. A powerful ability indeed, especially since she seems to be another glass canon like PW.

Valentine's Orgin story is what I'm REALLY looking forward to: we know so little about Last Hope that even after 5 years I got the names of the doctors mixed up. Hopefully we get a deeper look into Val as a character and her team.

Also...am I reading this right? You can no longer combo after crumples, not even with sweeps? I wonder why that was changed...
Reactions: MXDEX and MightyZug

Getting some good meaty stuff here, new Fighter, new Origin story and a completely new Stage that wasn't even in the original game!
Can't wait to learn about the SAs of all the new Doubles~

Some good fixes and changes too and i'm glad we got a (temporary) fix for top teams being nothing but Cerebellas!

Some things i would have liked to seen fixed are missing though.
Peacocks Juggle dropping certain fighters out of her combo (mainly Cerebella) as well as enemies being able to block before you can retaliate and punish, since these two were the main reasons i kept dropping Streaks in PFs.
Last edited: Oct 26, 2017
Reactions: MightyZug and Luke

All the information to make a sweet video <3
Reactions: Bronycon Gaming and MightyZug

What a MONSTROUS update! The wait has paid off in spades! <3 Really looking forward to playing with Xenomorph and Rainbow Blight Double (I doubt I will ever get Immoral fibre), the art is vibrant and amazing! It's obvious how much work has gone into it!
Reactions: Akasha_Eyre

Perfect. I'm surprised that they have put the only changeable color palette of all Skullgirls, in addition to the original Stage of SGMobile. I thought that Double was going to be broken, in the sense of the movements, because some "recovered" Cerebella and Peacock from the Closed Beta Test.
Reactions: MightyZug
A

I kind of hate the fact that after being shut out of this game for a month and a half from the Android 8 debacle that I'm still playing this game. But the constant updates and improving game modes make it too fun to stop. Looking forward to seeing how fun Double will be to play.
Reactions: MightyZug

Snow said:
What a MONSTROUS update! The wait has paid off in spades! <3 Really looking forward to playing with Xenomorph and Rainbow Blight Double (I doubt I will ever get Immoral fibre), the art is vibrant and amazing! It's obvious how much work has gone into it!
Click to expand...

I think rainbow blight will be the exclusive since it seems like the one people would most want.
Reactions: MightyZug and Ryouhi

Did anyone else notice a new symbol element for Double's "Rainbow Blight"? I'm already curious. Might have to do with her signature ability.^^
Didn't mind waiting a little longer for this one because the update looks great as always!
The blockbuster with Ms.Fortune now has me super hyped up. Great job, guys!
Last edited: Oct 26, 2017
Reactions: MightyZug

Peacockis2cool4u said:
Did anyone else notice a new symbol element for Double's "Rainbow Blight"? I'm already curious. Might have to do with her signature ability.^^
Click to expand...

It mentions in the UX IMPROVEMENTS section is that thats the symbol for the new neutral type
Reactions: MightyZug and Peacockis2cool4u

I can't wait for this. I wonder if Val's Origin story will bring in Oh Mai as obtainable through relics. Looks like it's time to start hoarding Theonite. HYPE!

So here for Nun of mass destruction and finding out more about the lore! (Also!!! I hope No man's land ain't mobile exclusive, but man... I can't wait to see it in action!)

Though I'm still pleasantly surprised Double has some exclusive moves the other cast can't perform, but we now have back Cere-stinger! (And if I'm right, Filia originally didn't have one of her BB's in the game.)

I wonder if there's going to be more Mobile exclusive moves we haven't seen in the console game!
Reactions: Bronycon Gaming, TRIX, Akasha_Eyre and 1 other person

What a tease, release a BB for Double of a fighter that isn't even in the game yet (looking at you Ms. Fortune )
Reactions: MightyZug

Hopefully this update will also fix the game freezing after fights issue that's made it essentially unplayable for me since update 1.5.0.
I'd love to dive back in with a new character, but not when I have to force quit the app after almost every fight.

Tom Kulczewski said:
What a tease, release a BB for Double of a fighter that isn't even in the game yet (looking at you Ms. Fortune )
Click to expand...

Isn't Fukua in there as well (slide kick), (Edit): wait nevermind I forgot that it was double specific.

Also what move technically cause crumple in the game?
Last edited: Oct 26, 2017

Will the new stage have new music to go alongside it?
Reactions: MightyZug and MXDEX