MIGRATION UPDATE: WE ARE LIVE ONE DAY EARLY!
1/17/18, 11:30 AM - We're happy to report that Skullgirls is now LIVE in most territories worldwide one day early!
It may take some time for the app to propagate in your territory, but keep refreshing!

For returning players, there will be a mail in your mailbox with a special thank you gift from all of us. Thanks again for your patience throughout this process!

MIGRATION UPDATE: ON SCHEDULE
1/16/18, 12:30 PM - Migration is going well. We have received user data from LINE and are in the process of integrating/validating/testing everything in the new Autumn/HVS environment. On schedule thus far. Will keep you posted as things develop!

UPDATE: 2.0.1 ADDITIONS
Since we posted our original update notes, we've made a few more updates and feature adjustments that will be included in the 2.0.1 build that is still on scheduled to go live on January 18th. Summary of these adjustments below in purple:

ACCELERATED JANUARY LOGIN CALENDAR
Since several days will have been lost as a result of the transition period, we have accelerated everyone's Daily Login calendar to Day 12, so logging in Daily through the end of the month will allow you to attain all monthly login rewards.

DOUBLE ADDED TO ALL STANDARD RELICS
Double Fighters and Moves have been added to all of the Standard Fighter Relics.

IPHONE X & ANDROID "ULTRA WIDESCREEN" SUPPORT
We've added official support for "ultra widescreen" (aka Super Scope aka Univisium aka srsly) displays, including 18:9 and 18.5:9 aspect ratios (like those used for the iPhone X and Samsung S8). No more vertical black bars!

IN GAME RELIC REWARD TABLES
Although we've always had our Relic Loot Rates posted here on the forums we now display these loot rates in game! We plan to add even more granularity to these tables in the future and will be updating the post above with the new Relic rates once the LINE Skullgirls version is no longer available: 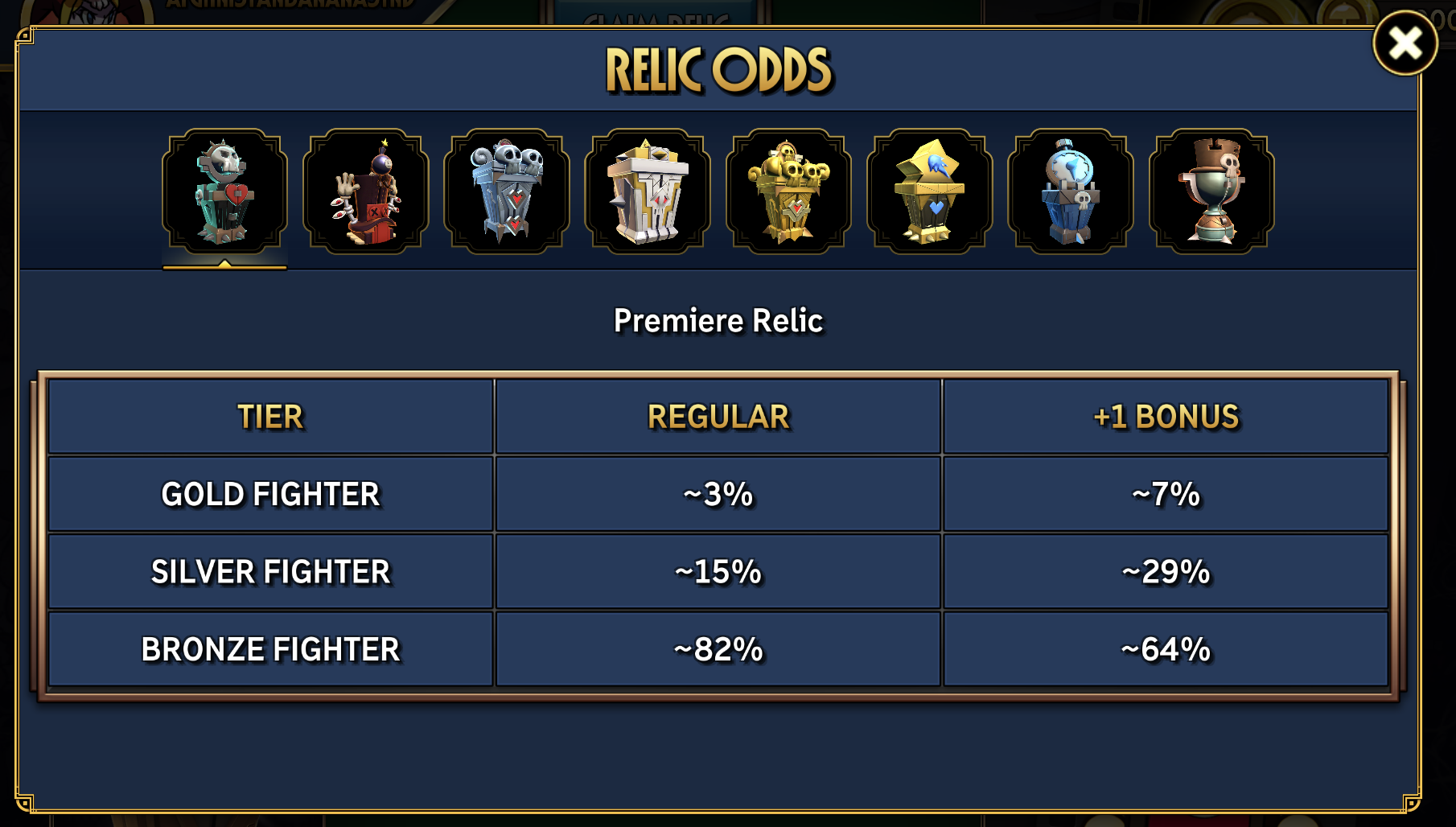 RELIC OPENING PRESENTATION
On the Relic Opening screen, Fighter names are now tinted to mirror their Bronze/Silver/Gold Tier to make it more apparent what rarity of Fighter you have unlocked.

This is it - the the one we've all been waiting for!

BRAND NEW APP
As explained in our App Migration FAQ, this version of Skullgirls will be a brand new app that you will download on the App Store or Google Play Store.

To recap very quickly:
If you have any questions about this process, please share them in the App Migration FAQ thread and we will be happy to answer them for you.

STABILITY AND PERFORMANCE OPTIMIZATIONS
We have continued to make bug fixes and optimizations to help improve performance to help ensure a smooth experience across all devices. Get ready for the best performing version of Skullgirls yet! 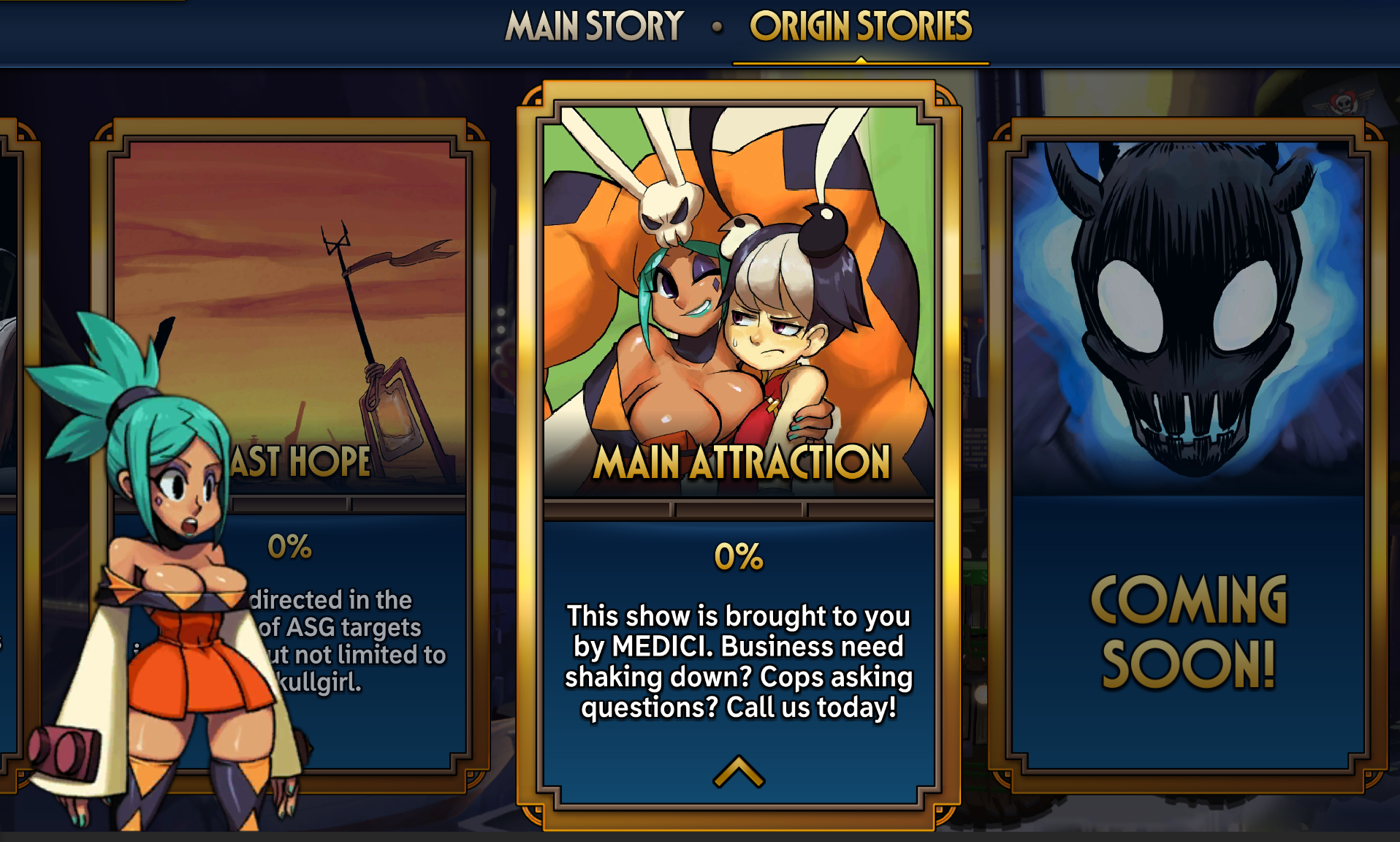 CHARACTER BALANCING
We've done a MAJOR tuning pass on various characters and their Signature Abilities based in large part on your feedback!

Our primary goal was to ensure that - while rarer Fighters (i.e. Golds) will always have a base stat advantage over other Fighters, we wanted to make sure that all Fighters still had viability in various end-game scenarios.

As a result, you'll notice that many Bronze Fighters received boosts to their Signature Ability potency and effectiveness, and some of the more maligned Silver and Gold characters also received boosts as well.

You'll also notice that some Fighters did NOT get any adjustments. There are a number of different modes and scenarios that we are planning on adding to the game in early 2018 which are intended to help certain types of Fighters / SAs shine. More to come on that in future posts! 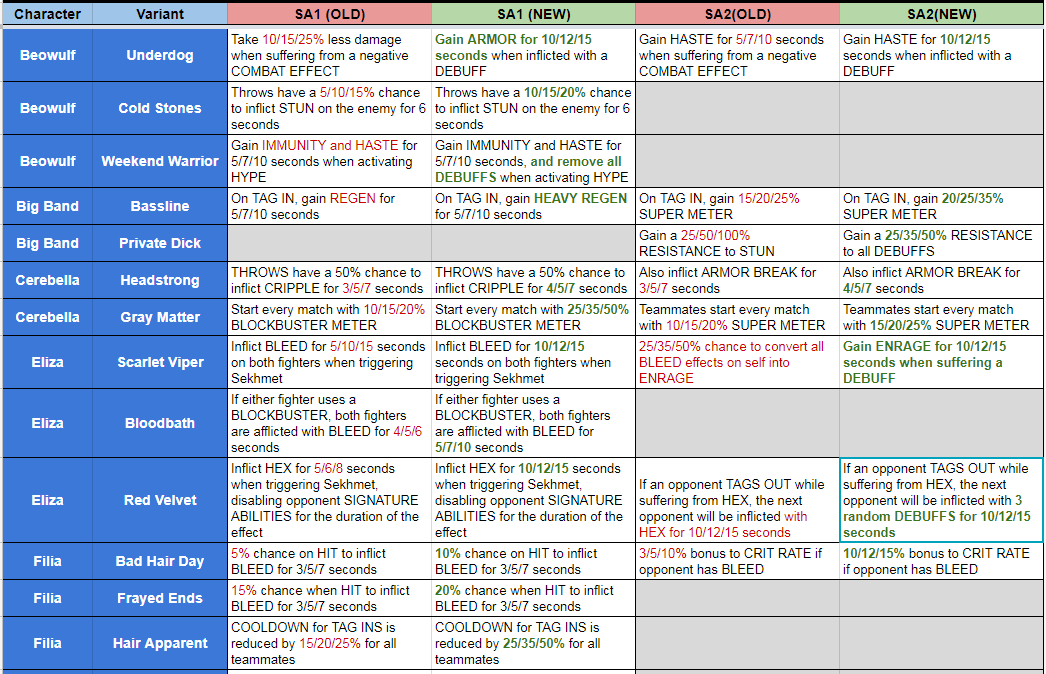 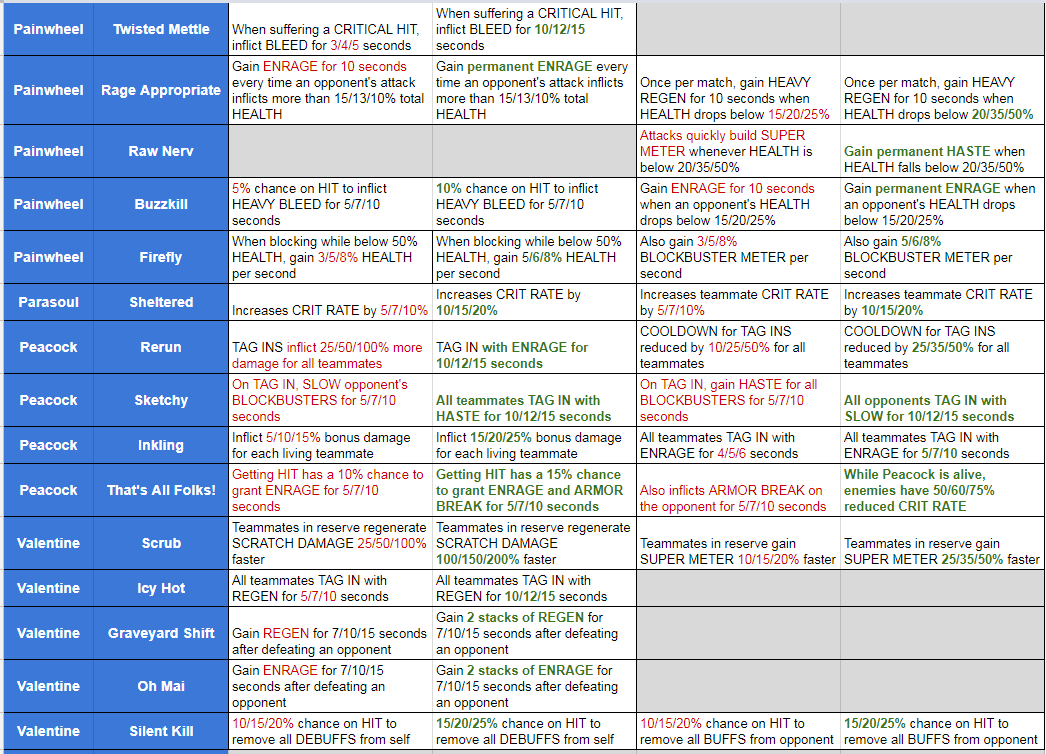 RELIC CHANGES
We've made a number of changes to our Relics: 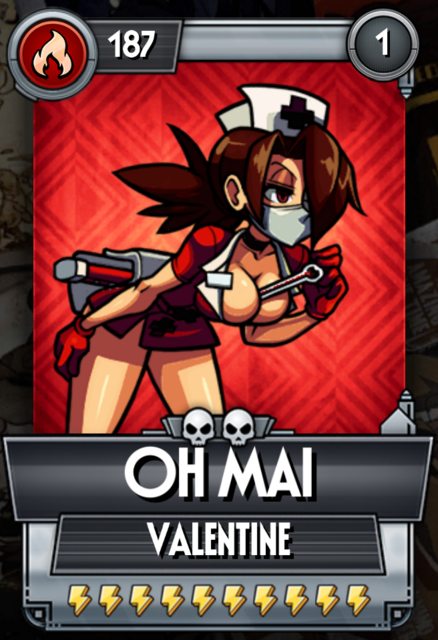 NEW EVENT - SHOW ME YOUR MOVES!
This is a new weekly event that will grant Move Relics as both Ranked and Milestone rewards: 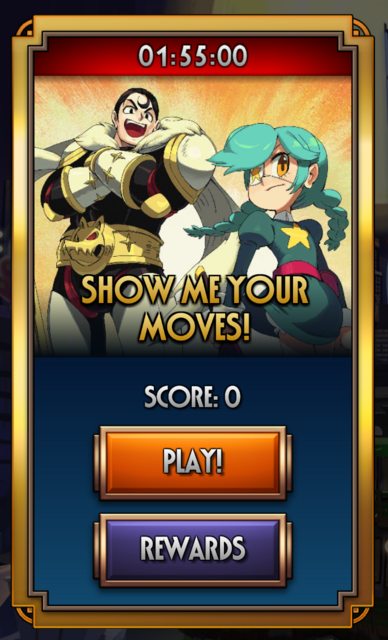 PEACOCK BB3 - DEADLY AIRPORT
As a bonus, you are now able to unlock a revised version of Peacock's infamous BB3 Deadly Airport! 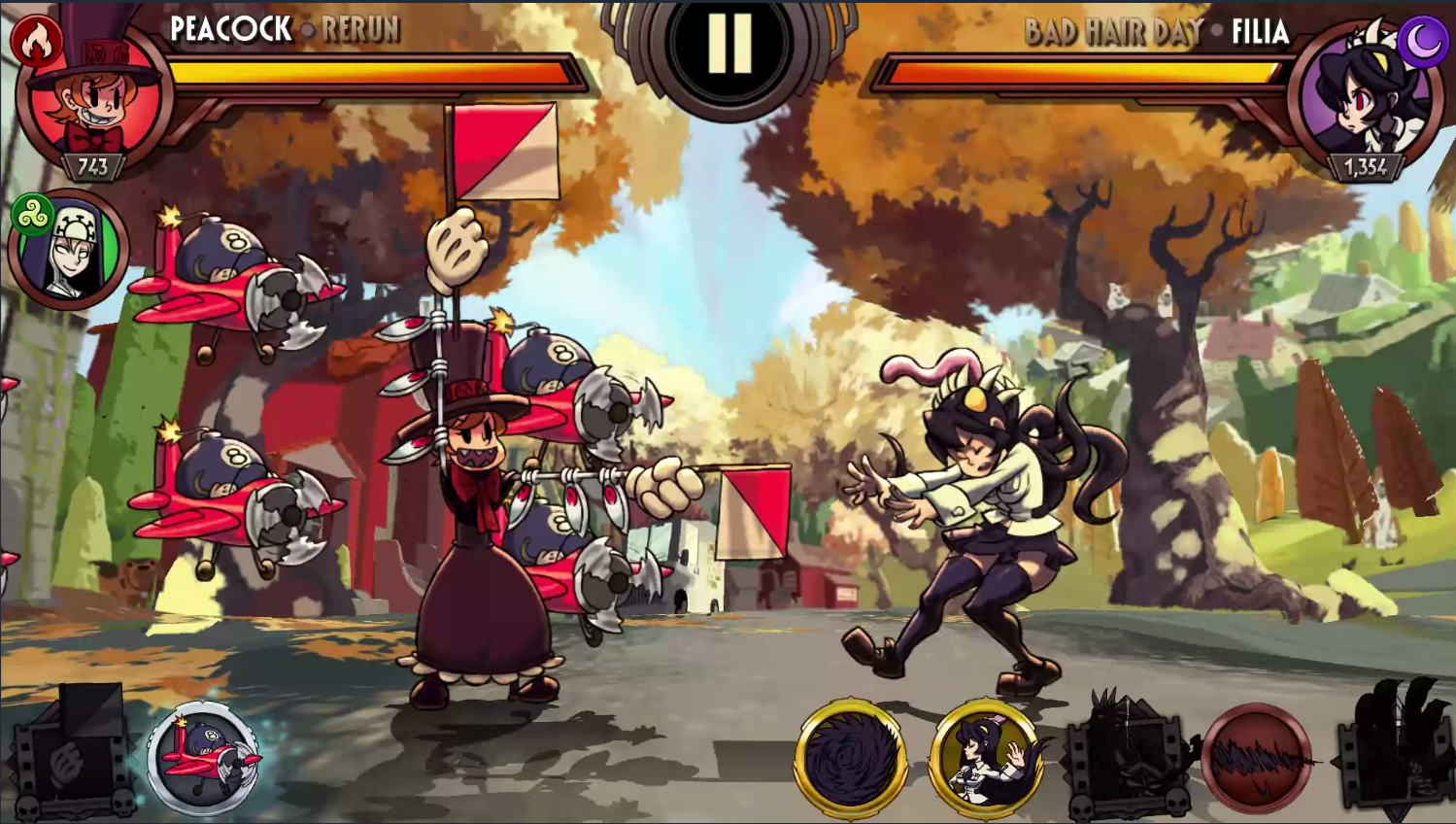 See it in action on Gfycat! 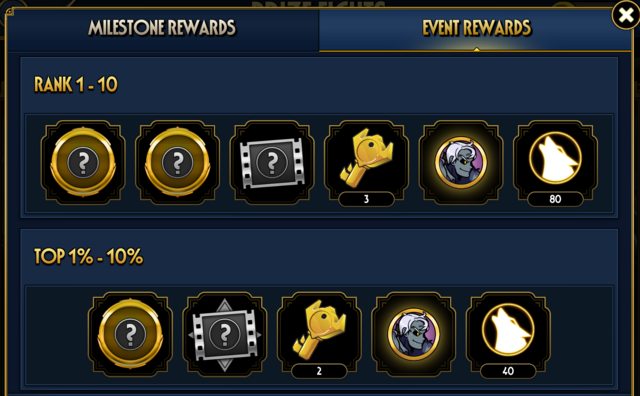 BLOCKBUSTER DEATH PORTRAITS
Now when you defeat an opponent with a Blockbuster, keep an eye out for some fancy new slo-mo and over the top death portraits! 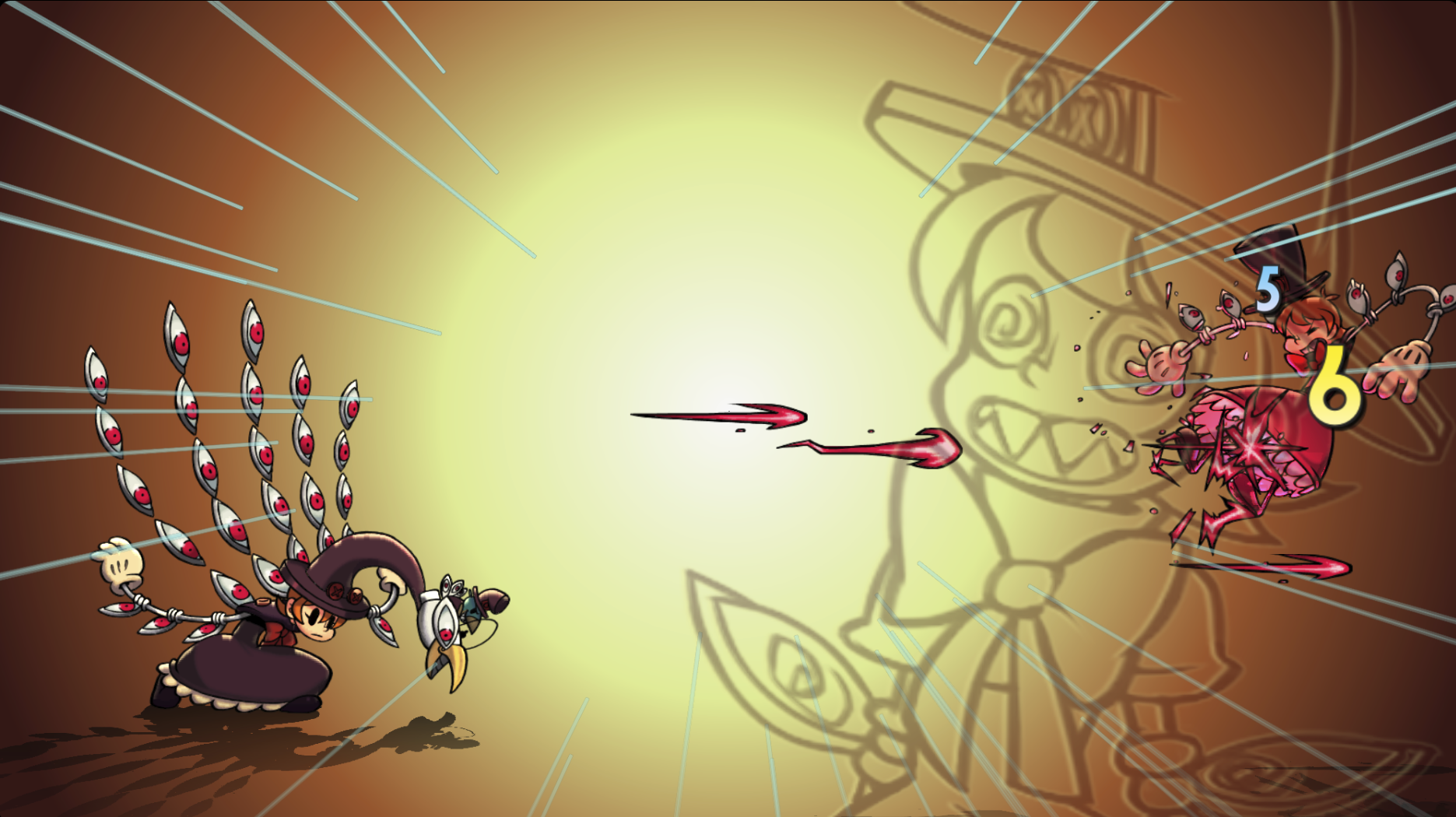 IMPROVED FILTER / SORT TOOLS
We've revised the Filter/Sort functionality on the Collection, Team Select, and Move Equip screens to include Character Type and a host of other handy features to make sifting through your collection easier! 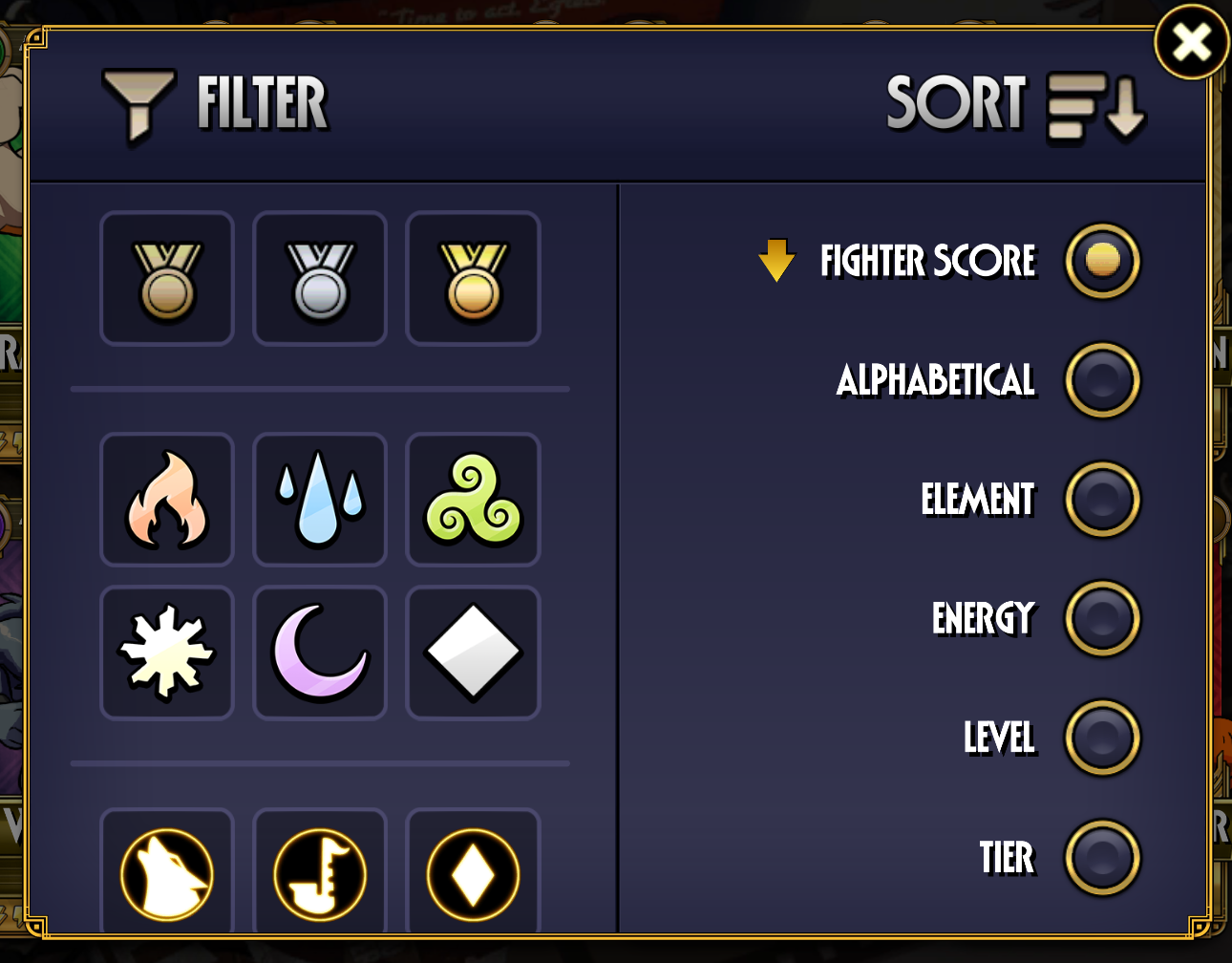 CLEARER NODE MAP COMPLETION STATES
We've added a green checkmark next to completed nodes on the Node Map to avoid any confusion regarding what is/isn't completed. 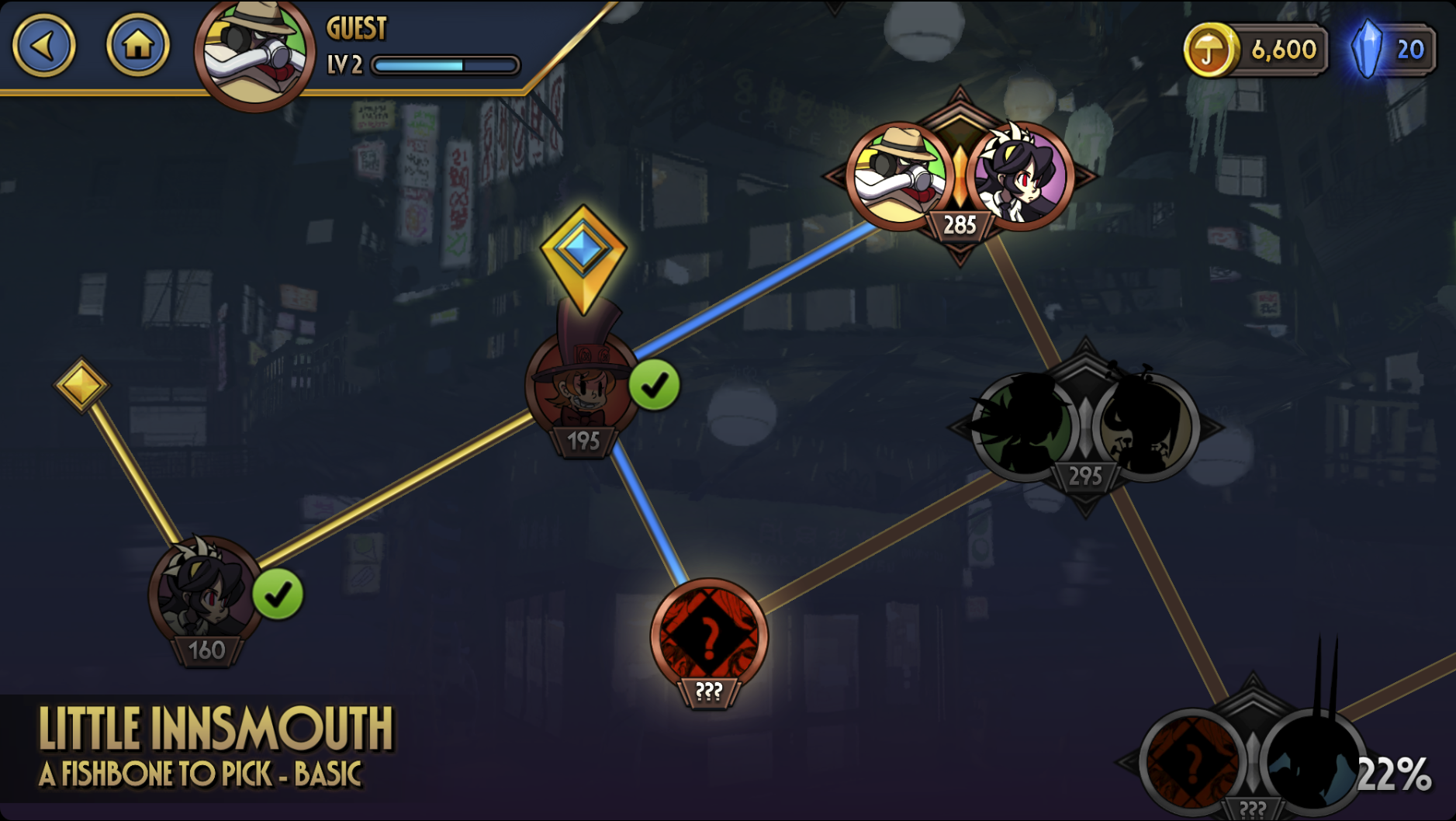 SPECIAL 2.0 STORE PACKS
A selection of special 2.0 bundles will be made available via the Store for 30 days after you log in for the first time.

Only one of each bundle can be purchased per player and each contains an assortment of rewards (including Theonite and Canopy Coins) in addition to the "featured reward" shown below.

Be sure to check out the full details in-game to see everything packed into every bundle! 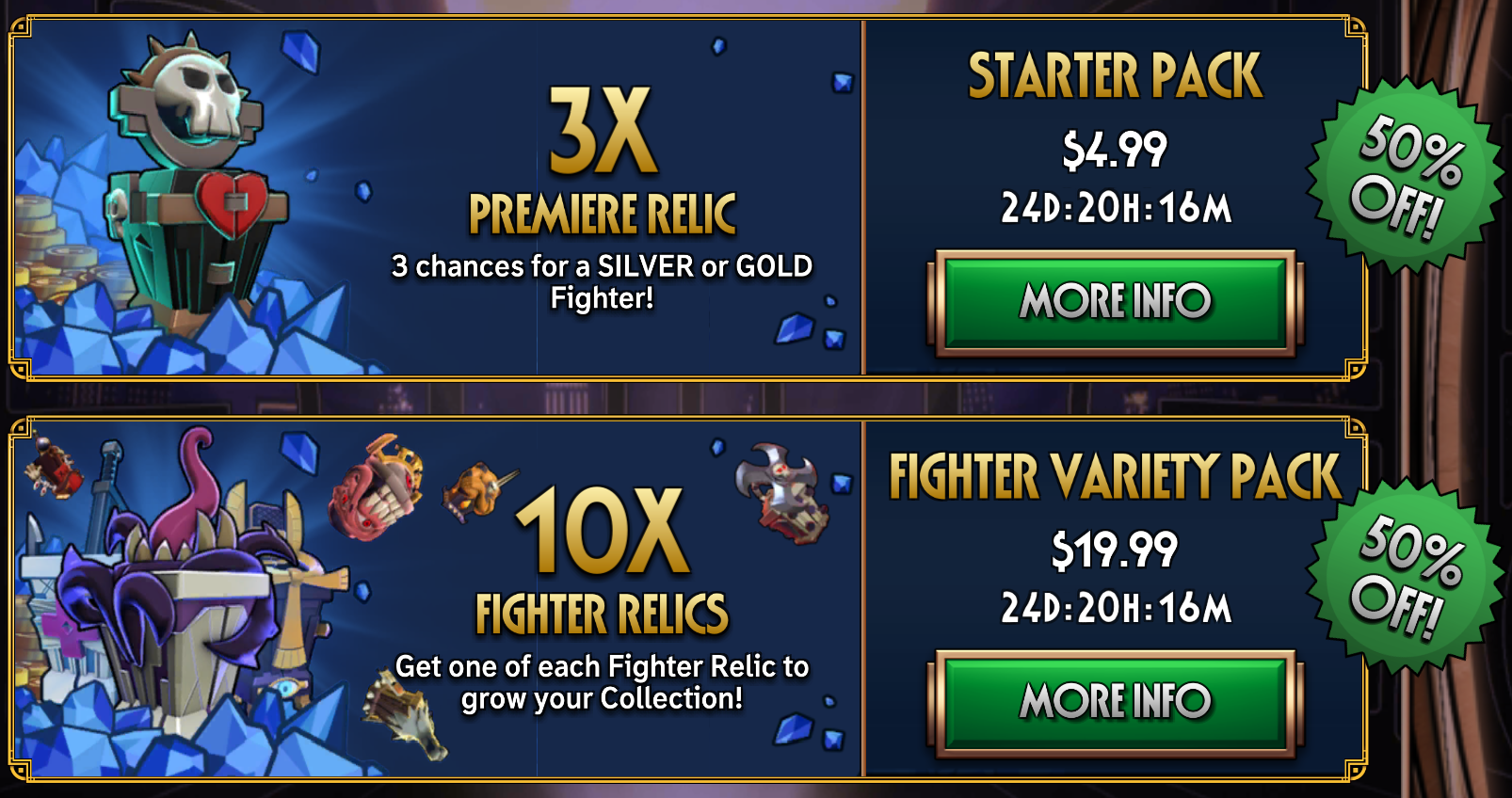 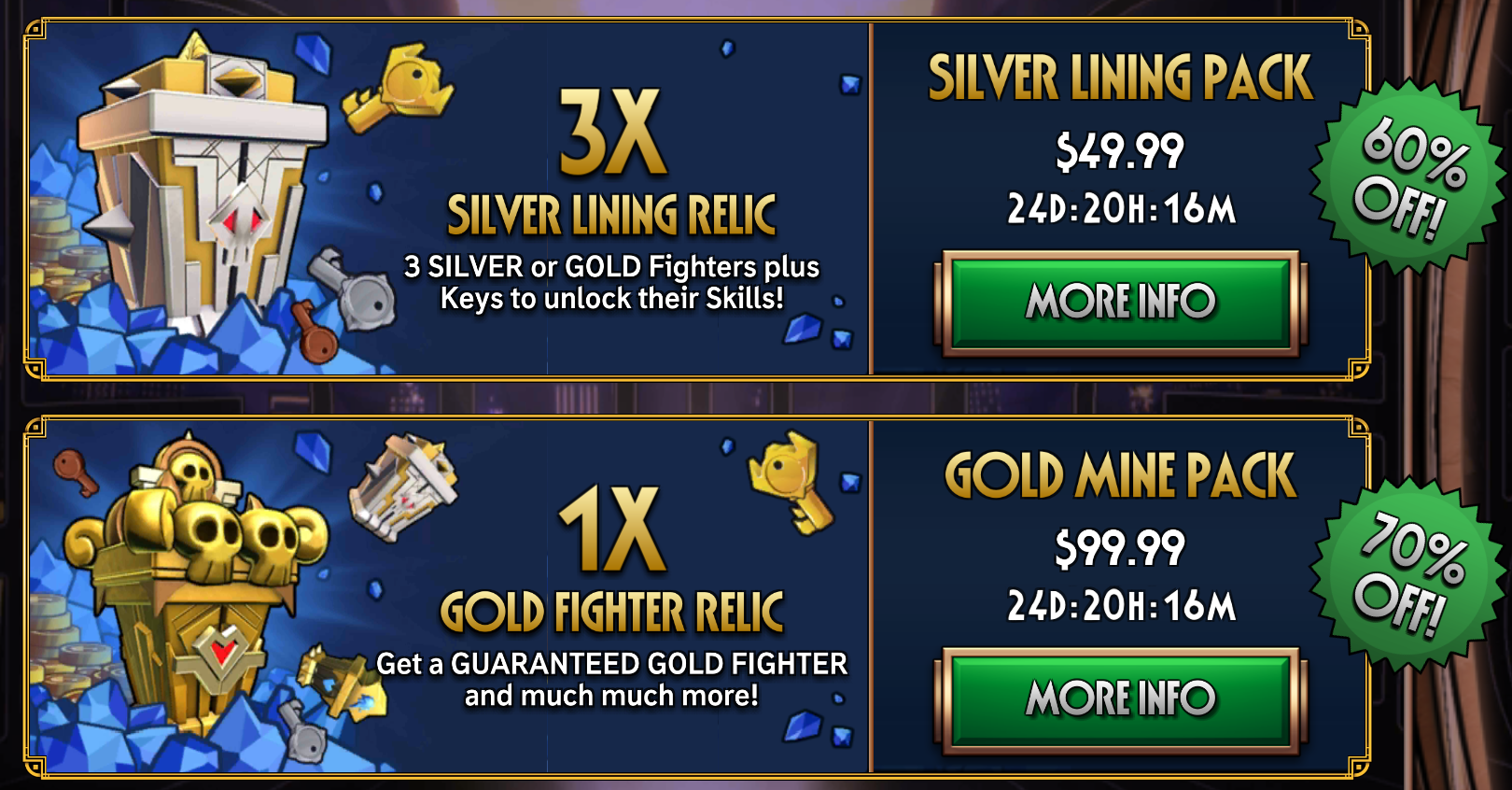 JAPANESE VO TOGGLE
As a sneak peek in advance of our upcoming launch in Japan, we have made the Japanese VO available via a toggle in the Options Menu. For those who don't know, in addition to the incredible English Voice Actors Skullgirls features an all-star cast of Japanese Voice Actors that many of you likely know from your favorite games and anime.

GAMEPLAY ADJUSTMENTS
MISC UPDATES AND BUG FIXES
WHAT'S NEXT?
We'll be making a new post around New Year's Day outlining some of the exciting features we have planned for early 2018. Stay tuned!

OUR THANKS
Lastly, I just wanted to quickly say "Thank you!" to all of you in our amazing community - both those who have been here since our initial soft launch waaaay back when, to some of the newcomers who are checking out the game for the first time.

Skullgirls is a labor of love for all of us involved, and we're 100% committed to making it everything it is capable of being, but we couldn't do it with you and your support.

Very excited! Not sure exactly what will happen with the relics, but thats the only thing Im not looking forward to.
Reactions: Hall☆weenQueen and MightyZug

This gon b the best update yet

Finally no more ugly green logo when opening the game
Reactions: alexanderabrook, Veracroz, JarlBeimar and 5 others

It may sound like a jokr, but im serious, the best thing about this update eill be the removal of that ugly green logo on startup.
Reactions: JarlBeimar and MightyZug

Thanks for all the hard work and listening to the community. It'd be a lot less fun if you guys weren't so awesome with being active with your players. Keep it up, I'll be more than happy to keep supporting you guys.
Reactions: Viranova

Have to admit I'm not stoked about getting a different character from specific relics especially when new ones come in (like say my personally anticipated Fortune). 50% is a big drop and I know it'll sour the whole thing when it happens to me >.>
Reactions: alexanderabrook

Poringsmasher said:
Have to admit I'm not stoked about getting a different character from specific relics especially when new ones come in (like say my personally anticipated Fortune). 50% is a big drop and I know it'll sour the whole thing when it happens to me >.>
Click to expand...

I never managed to get an exclusive, so being able to get those from premiere relics will be more of a godsend to me, but I see what you mean. I don't imagine it'll be too bad, it at least means skillpoints are more evened out across the board if you wanted to open just character relics from a select few fighters.

It would be good to make a new mode called "And in other news..." that has the image of the reporter Canopia Kingdom and that I changed the map and are different story, where you catch the criminals with different characters.
As "Acts of good faith" Double faces the Medici or "Someone new on the Ring" Beowulf and his new fights or "The Divine Council of Bastet" Eliza gets strength by killing the characters or "Medical Record" Valentine getting new samples for Brain Drain or "Naive Force" Cerebella no longer trusts if the Medicis are good or bad and that every day changes the map and the event, that the prize be a key for every difficulty.... It's an example but it would be great, for now and from what I see they always do great things. My congratulations and blessings of Bastet

I like Relic Exclusive Fighters
the way it is now.
In my opinion in the game must have a little reward the ppl who spends more time in the game.
As I always say everything that is difficult becomes more exciting.

SA i love this game.

I'm not 100% fond of the changes to the Fighter Exclusive Relics. You will have to buy double the amount of relics compared to now. That's quite the change.
Maybe we could get 100% on the Relics when we get a new fighter, and after the first week the chance gets dropped to 50%.
Reactions: Hall☆weenQueen, Viranova and Fel

This is going to be awesome!!!

The one big problem I see with the character relics becoming 50% is when new characters come out. I dont want any old golds, Im pulling the squigly relic because i want squigly. Statistically Ill have to pull twice as many relics to end up with the same amount of squigly.

The change overall makes sense, no exclusives is nice and 50% is a lot better than 9% if you want a certain character, plus the buffed gold rate helps mitigate any salt. However, Id like it if theyd consider having event periods, like 1 or 2 weeks after a character release/variant release where the rate was buffed back to 100%, even if the gold rate goes down to what it is currently during that period.
Reactions: Hall☆weenQueen, Lolleroni, Viranova and 2 others

I've been a little burned out from the game and didn't have much time to play recently since i'm in the process of moving to a new apartment, but i'm really excited to get back into the game when 2.0 hits <3

Hope you guys have wonderful holidays and i can't wait to see where things will go in 2018
Reactions: Hermech_Crab and moisterrific

Will you have a makeover in the prize pool for SA 2.0.0? Use less energy and be blocked from using crystal for recovery to be fairer an award or an idea to make it fairer.
Reactions: tom641

The update is going to be great
Reactions: Liam
A

I can`t wait! This is gonna be amazing!!

JAMES D JONES said:
I hope we get to keep our block buster and crest for our progress and saving
Click to expand...