Jasonissm said:
maybe for Filia's Ryuko Mario palette she can have an ability similar to Valentine's damage done can't be healed because of their scissor blade in the anime

Although this would be a very weak ability

Maybe something to do with Senketsu absorbing life fibers where she can heal and/or gain enrage upon defeating a fighter
Click to expand...

Have you even watched the anime?

Ryuko gets stronger after beating enemies cuz she absorbs their life fiber, which would be pretty much the equivalent of getting Enrage after defeating an opponent in this game.

Also I made it Enrage for the sole purpose that in situations where she can only fight a single enemy, she can still gain Enrage from using her taunt and thus make the second part of her SA work out.
J

Are the skins that use anime actually based on the anime character abilities though? I haven't watched Evangelion so I'm now sure what Raw Nerv EVA is meant to do in the source material.

Jasonissm said:
Are the skins that use anime actually based on the anime character abilities though? I haven't watched Evangelion so I'm now sure what Raw Nerv EVA is meant to do in the source material.
Click to expand...

If Raw Nerv’s SA was actually closely based off the anime, she wouldn’t suck.

If it was, it would look something like this: 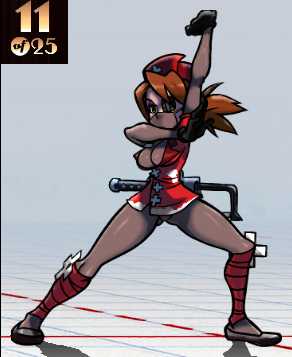 On the move Valentine

"It's not my fault you didn't want to come to a sterile environment."

Some names could be:
Crowned, Dreamy, Royal blues

I'm not sure what his special ability would do that relates to King DeDeDe.

Also madoka Filia, kyoko squigly and Mami Fortune to go with the Already in game Homura Cerebella (aka gray matter aka ms. 'i really need a buff on my SA')
Last edited: Dec 8, 2017
Reactions: moisterrific
L

Also if we're doing the KLK palettes then we should also do the Scanty (17. Filia) and Kneesocks (9. Parasoul) palettes and go full on trigger animation
Reactions: moisterrific and Shawesome

Hey, there’s a google forms page now for voting on palettes for the new characters! The vote isn’t guaranteed to have an effect on the results but the consensus will be useful feedback for the team! Posted in discord originally by @Liam
https://docs.google.com/forms/d/e/1...sDYE76JK4pormMY9fkbZnG3XQEPg/alreadyresponded
Reactions: Cartouche‼, Peacockis2cool4u, TRIX and 1 other person

ImaiKari said:
Hey, there’s a google forms page now for voting on palettes for the new characters! The vote isn’t guaranteed to have an effect on the results but the consensus will be useful feedback for the team! Posted in discord originally by @Liam
https://docs.google.com/forms/d/e/1...sDYE76JK4pormMY9fkbZnG3XQEPg/alreadyresponded
Click to expand...

I think it may be worth mentioning that, if you want to be extra careful with your three votes, there is probably no need to vote for Option 1 on each fighter or the black and white colour schemes as these will most likely be included in the game anyway: as one of the basic bronze palettes or as a Sparring Partner dummy for training mode. I would like to state a disclaimer, though, as I do not know this for a fact. I am just assuming it using the pattern we have had with fighter variants so far.
Reactions: Shawesome, RedRidingHoodie, TRIX and 1 other person

Didn't read through to see if anyone else agrees with me. But I'm waiting for Eliza to get her raven palette. I'm going to blow a fuses, if we never get it

Welp, I got few ideas for the characters. Unfortunately I'm not eliglible to post links, so you have to check which pallete is for which character.

As a counter to such annoyances like first half of these buffs. Refferences to Monster Slayer and the Witcher.

Little homage to Big Band, especially Epic Sax, and a band called "Too Many Zooz". Might need nerf or change of type.

SA: "Catch 'Em All!"
Outtake moves performed by this fighter cause enemy to get a debuff, causing their tag-in cooldown to be increased by 20/30/40/50/60/70 seconds. Effect can work only on one enemy.

Obvious refferences are obvious. Very gimmicky character that can change the Prize Fighting chances of low FP figters accounts that cannot deal with 2-3 times stronger characters killing your fighters with one BB3.

I really like how this pattern looks, especially as more desertish Surgeon General, so here's a fast SA idea.

SA: "Wonderful Shield"
Each Evaded hit has 20% chance to stun enemy for 1/2/3s. If Filia Evades at least one hit, her Evasion is extended for 1/2/3s including the stun chance.

Might be God-Tier against projectile-based characters and long range hits. Obvious reference for anybody who touched DC Comics franchise at least once.

SA: "Death and Pestilence"
Grants permament Heal Block on enemy and Heavy Bleed upon herself while in fight.
Every time she kills a target or hit them with Blockbuster, she regains a 15/20/25/30/35/40% of her missing health.

WH40k reference to Papa Nurgle and a risky but could be quite tanky and works well with the concept of Double.

SA: "The Widowmaker"
Each enemy kill or tag out (forced or not) gives a stack of "Feast" up to 3/4/5. Sekhmet kills grants 2 stacks.
Triggering Sekhmet while having any Feast stacks grants half of the stacks as Enrage (rounded up) and 2/4/6% lifesteal for the duration of Sekhmet.

Very straight forward idea and another try of utilizing the mechanic of Outtakes.

SA: "Health Transistor"
Each hit has a chance to regain 50/60/70% of the damage inflicted as Red Health (recoverable during Tag Out).
Healing while Tagged Out, grants stack of Heal to the current fighter and 10/20/30% of her Red Health damage to second Tagged Out character.