Now that the dust has settled from The Server Issues that plagued us in early February, we're excited to be able to share details regarding a brand new update! We have just submitted this update to the App Store, and are expecting that it will be released early next week (ideally Monday afternoon PST).

UPCOMING UPDATE CADENCE
Many of you have asked what impact The Server Issues would have on our upcoming release cycle. In brief, due to all the technical investment and extensive customer support required, it basically shifted back all of our plans by 2-3 weeks.

In general, our plans are still to release an update every 4-6 weeks that includes a combination of new stuff to play with (characters, moves, origin stories, modes, special prize fights, etc) along with bug fixes, improvements, and optimizations to help ensure the game is running smoothly.

In light of all of that, this 2.1 update is a little bit leaner than usual and is more focused on bug fixing and stability than brand new content. We'll get back to our standard balance of new content and polish for 2.2 (which you should expect in early April).

BANNABLE OFFENSES
Before we dive into the fun stuff, we've discovered some folks in the broader Skullgirls player community that have been engaging in some pretty shady in-game activity (ex: 50x IAP attempts in under a minute, etc).

As such, those users have been BANNED. Banned users will not be able to access their account and will be prompted to contact us directly if they feel the action has been in error.

We've made a special forum post for Bannable Offenses. Let us know if you have any questions!

2.1 UPDATE NOTES
And awaaay we go! 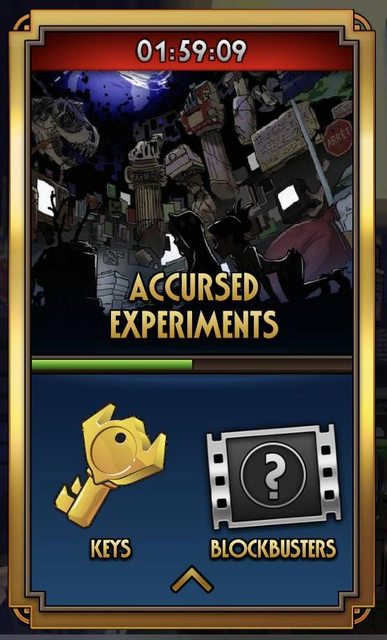 In addition to featuring maxed out L50 gold Fighters, each fight contains a unique cocktail of experimental modifiers that have been painstakingly designed keep you on your toes.

As you can probably tell, these fights are designed with our late-game players in mind and are intended to be HARD. We're eager to see how everyone enjoys these modifier-heavy Puzzle fights!

ACCURSED EXPERIMENTS REWARDS
COMBAT ADJUSTMENTS
MISC BUG FIXES & IMPROVEMENTS
There we have it! As always, please share your feedback about what changes you like, and what you’d like for us to add next. We’re listening!

We have a lot of exciting new content actively in development (including a certain character everyone's been hankering for...) - looking forward to sharing more details as we approach 2.2 and 2.3!

A shame we didnt get more content this time round but understandable.
Great job taking care of the bugs as always. Im definutely looking forward to the weekly event!
Reactions: David Mendez Gurra, video game, Psyche and 2 others

You know, sometimes I appreciate these ‘little’ patch updates much more than content releases. No point having a boatload of exciting new features if none of them work properly.
Excellent job as always, guys. Keep up the good work!
Reactions: David Mendez Gurra, video game, JazzWasHere and 1 other person

Will the new daily event help me to earn the rest of XP that I am need so that it is finally the maximum level? (This week I reached to LVL 59). Excellent Work Guys.
Wake up me whens "Certain Character" Comes the Game.
Reactions: David Mendez Gurra and MightyZug

MightyZug said:
Fixed issue that would show your Fighter leveling up multiple times, even if they did not earn the XP to actually do so (and thus had not leveled up)
Click to expand...

Update of the millennium.

Cellsai said:
Update of the millennium.

Thanks for the hard work, HVS!
Click to expand...

I love the update and all the improvement.
My only thing was if you guys looked into Bella throw when it came too double. I seemed to have issues with using mgr and diamknd drop with double. Its been a some time since ive fought double with Bella but I k ow others had some issues too
Reactions: David Mendez Gurra

The update will help a lot, they try hard.
Reactions: Csrgame2099, David Mendez Gurra, Psyche and 1 other person

Though small, this update packs power. The first inkling of endgame content, a new source of keys, and several performance fixes for issues that have affected me personally. Nice. Also good to see you guys maintaining the integrity of the game with bans. Thanks, guys.
Reactions: David Mendez Gurra, Luke and Psyche

Museamongmen said:
I love the update and all the improvement.
My only thing was if you guys looked into Bella throw when it came too double. I seemed to have issues with using mgr and diamknd drop with double. Its been a some time since ive fought double with Bella but I k ow others had some issues too
Click to expand...

It’s good that you’ve noticed a bug and are reporting it, but unfortunately you’re not really doing it in the right place. It would be much more useful for the developers if you made a thread detailing this problem in full (with screenshots if at all possible) in the ‘known bugs & issues’ section of the forum. If you just make one comment in a thread where the bug is not entirely relevant then it is less likely to be noticed and patched in the future. Just trying to help!
Anyway, less than twenty-four hours left to the estimated update release. It’s time for Hype Man to earn his pay.
Reactions: David Mendez Gurra

♡ You guys are the best! ♡
Reactions: jeremyhall2727 and David Mendez Gurra

And with every update: my heart and respect for the staff grows more and more...!

Keep up the good work! I can't wait to test my skills on this new challenges and see what else is to come!

it's a year late
Reactions: Psyche

JamJar said:
it's a year late
Click to expand...

Thank you Molly for the status report. We're living in the future now boys.
Reactions: RiotCounter

JamJar said:
it's a year late
Click to expand...


Servers are coming down shortly for maintenance!
We'll have more news on downtime length a little bit later.

Probably won't have enough time to pop a video on this update but I'm super excited for this one^^. Another well done job by the Devs♡♡
Reactions: TRIX, David Mendez Gurra, Liam and 1 other person

Any idea what that new character may be? From what I’ve seen, Fortune and Squigley were the top two wanted next.