Hey everyone! It's that time!!!

We've been putting the finishing touches on our latest update, and we're in the middle of the submission and release process as we speak.

The first big feature we've been working on for Skullgirls 2.2 is...

Prize Fight Changes
We've made some huge changes to our Prize Fight system, we'll dig into all of the details below, but first and foremost we wanted to:
Setting Defense Teams
When you join a Prize Fight, first thing you'll need to do is set a defense team that other players will face. Build a team of three fighters that you think others will have a tough time defeating! Remember to consider the current Prize Fight's modifier to build the most challenging team.

If you upgrade a node, level up, or equip a new blockbuster, the changes will also be automatically applied to any defense team that contains that character. No need to worry about constantly updating your defense team once you set it! 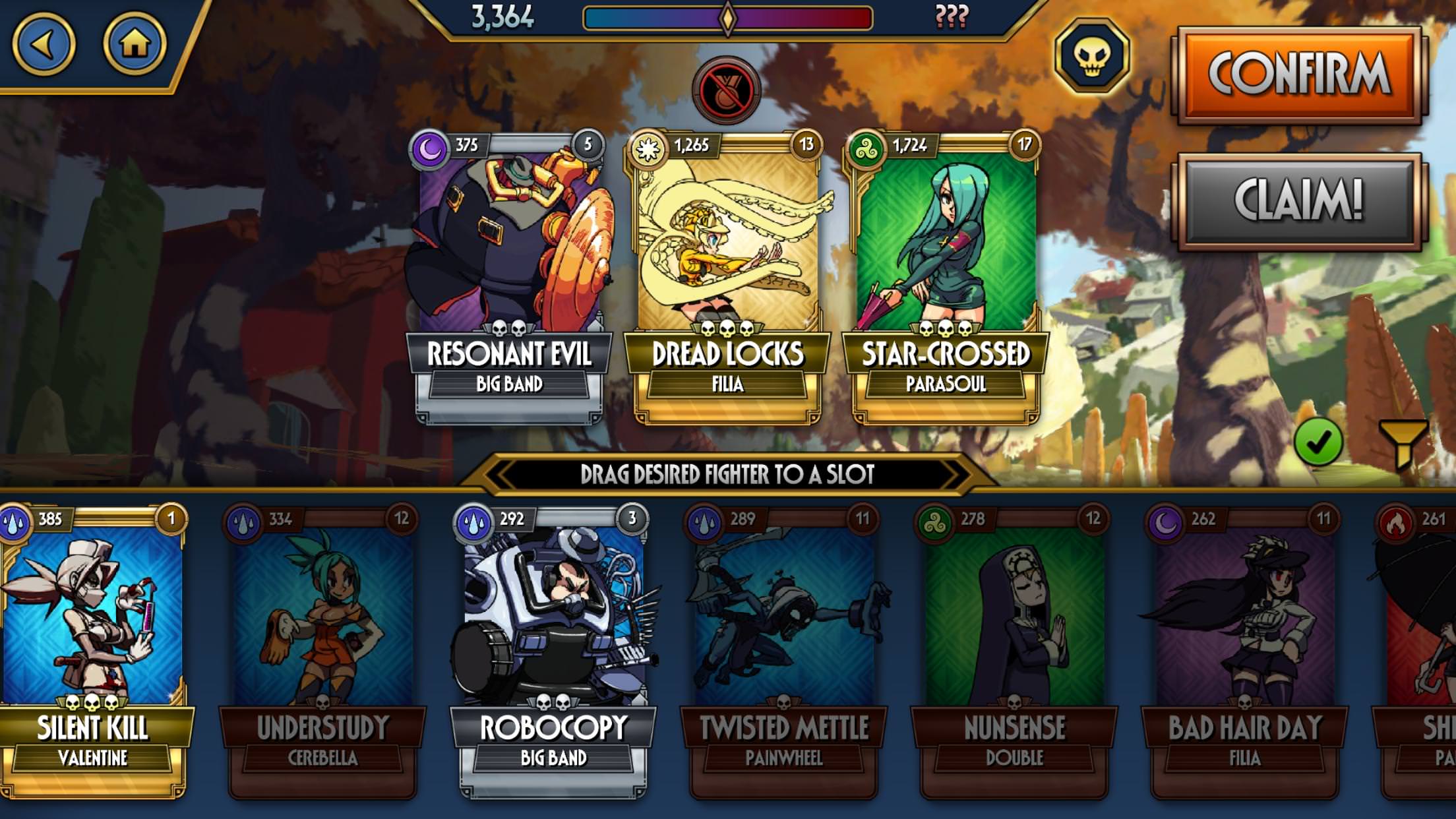 Claiming Rewards
Every time your Defense Team fights another player, you earn points - win or lose! A win will grant you 10% of the total FS of your team and the opponent's team, whereas a loss will earn you 1% - every little bit helps!

Be sure to keep track of Fighters and team compositions that are often beating your team so you can fine tune your team for maximum performance!

After your team is challenged 10 times, you won't be able to receive rewards for any fights until you claim your points. There is no notification for when your fight history is full, so make sure to check in often if you want to maximize your point gains! 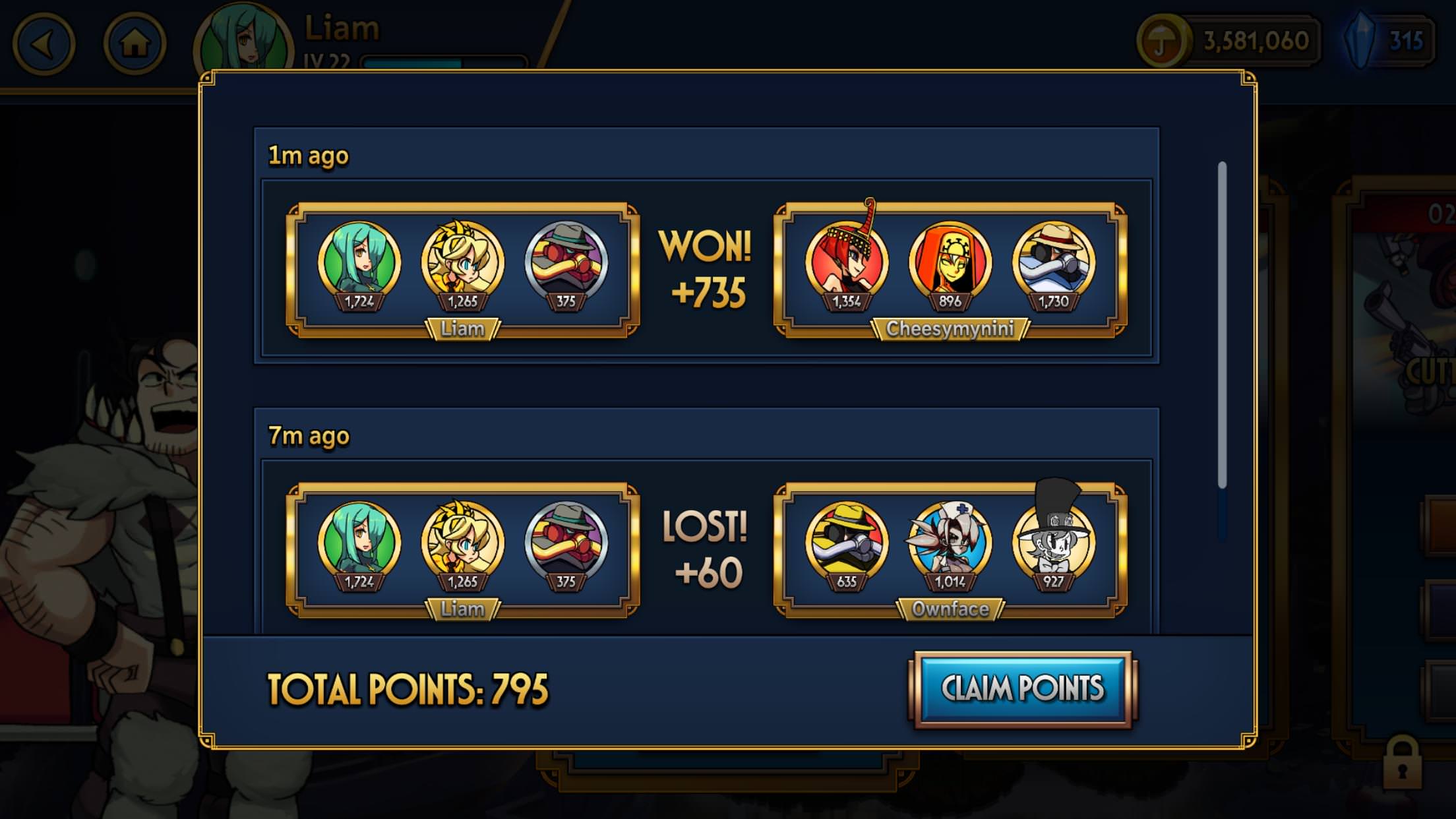 Fighting Other Teams
Just like before, you're offered three teams to fight against. However, after choosing the team you would like to fight against, you'll notice something is different:

You now choose your team AFTER selecting your opponent.

"What!? That's crazy talk!" (It's not, actually, and just for reference, this is crazy talk)

THIS is where "hard counter" Fighters will be especially useful. Know you're going up against Armed Forces or Resonant Evil? Bring Peacock Ultraviolent and/or Silent Kill! Going up against Princess Pride? Bring a Wulfsbane and block that healing!

Refresh Opponents
Because the teams you're fighting against are going to be a lot tougher this time around, we've added the ability to "Refresh" your opponents list for 30 Theonite.

Despite all of these new tools at your disposal, you'll need to play your hand perfectly in order to survive at the highest streaks.

Prize Fight Streaks & High Streak Modifiers
Given that you now choose your opponent first, streaks and opponent selection have been reworked!

Here's the run down of the changes:
Opponent Type Clarity 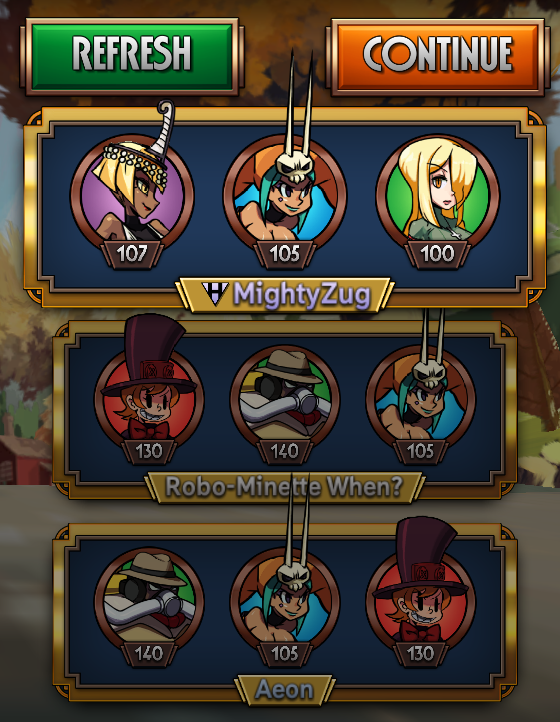 We understand that these changes are pretty substantial -- as always, we're eager for your feedback!

Graphics
Modifiers, Buffs, and Debuffs
Valentine
Double
Painwheel
Blockbusters
Phew - you made it!

Let us know what you think of our changes down below!

We can't stress enough how important your feedback has been for shaping the future of Skullgirls, and you have all been amazing so far at sharing your thoughts with us!

Keep an eye out for this update early next week!

We know how much you guys are looking forward to our next character, so keep an eye out for a certain someone in our next update. We'll be teasing more details about her very soon...
Last edited: Apr 6, 2018
Reactions: VicKing, David Mendez Gurra, jeremyhall2727 and 14 others

Glad I will no longer need to be paranoid about cropping my name out of all screenshots I take of the game!

And looking forward to some real challenges in prize fights.
Reactions: Hall☆weenQueen, Peacockis2cool4u, Synfull and 1 other person

i was expecting for the new upcoming characters,such as Miss Fortune, Squigly and Robo-Fortune. oh well, gonna wait again
Reactions: Hall☆weenQueen, Sentient_Spacedust, Yosh and 2 others

I called it guys she's coming soon I swear.

-sobs cause no squigly- looking forward to defense teams tho, my armed forces and resonant evil are begging for some use! also glad about being able to take screenshots w/o worrying about my name showing
Last edited: Apr 8, 2018
Reactions: Hall☆weenQueen and Sentient_Spacedust
S

Lovely as always. But what cheers me most is the Chat in game. Since in a Facebook group where I am, we usually talk about the console or mobile game (obviously), lately the group has gotten infected of publications of if certain fighter (Example: Parasoul Primed or Big Band G.I. Jazz) is good to improve or level up (and me and a friend have been taking care of them as we can, for the time and the school).
Even me and a friend could make a help group in the game for the Spanish language and help and serv Spanish-speaking players in my case.
Excelent Work Guys.
Reactions: RedRidingHoodie, Sentient_Spacedust and Cartouche‼

Renan Flippy said:
Even me and a friend could make a help group in the game for the Spanish language and help and serv Spanish-speaking players in my case.
Excelent Work Guys.
Click to expand...

Players will be sorted into chat rooms of their own language (and are free to move into whatever rooms they would like to, such as English), so it should be easy to find a group of Spanish SGM players : )
Reactions: moisterrific, Peacockis2cool4u, Renan Flippy and 1 other person
A

Speaking of defense teams, I'm guessing we can choose different teams for each PF?

They should improve rewards by raising the user level...... in the next update it would help them to have more players.
Reactions: vucaar

Neferu1109 said:
They should improve rewards by raising the user level...... in the next update it would help them to have more players.
Click to expand...

Totally agree, If I'm not wrong when I was between level 40 to 50, I used to receive 150 crystals, and now I'm between level 50 and 60, I only get 100 crystals, but maybe the milestone rewards improve to compensate (they don't say it but I want to believe there will be changes).

Talking about the update, I don't like the reduction on rewards of daily events but, in general, I really like the idea of improve the prize fights mode (or dynamic), great work, I think the challenge will raise and become this mode even more attractive. And the chat rooms is a great idea too, I hope we can have a room or channel to talk our own languages.
Reactions: Neferu1109

Yay major update! I'm super excited for the new changes in pf. A question though.

It says "Players now received 25 Theonite on EVERY Player level up."
Could anyone tell me how much we used to get per level? Is this an increase or decrease?

"All daily mission rewards have been reduced by 5 Theonite" Do you mean five in total per day or by each mission, as in 15 per day? I'm a little skeptical about the reduce in Daily Reward theonite. When I was first starting out in the game the daily rewards were the biggest incentive in playing every day. When you're a newbie, getting good in PFs are impossible and dailies honestly don't have enough booties to be very interesting. The first month I played I played mostly for the reward theonites. Is it worth the grind now, I don't know.
Reactions: Hall☆weenQueen, TonyPartridge30 and Peacockis2cool4u

Alex Tan said:
Speaking of defense teams, I'm guessing we can choose different teams for each PF?
Click to expand...

Alex Tan said:
Also, what happens if we could not immediately set our defense team on PF starting?
Click to expand...

from the sound of the notes, we can set it as soon as we can start a PF and we won't have a defense team if we don't do it at all for each one


vucaar said:
And the chat rooms is a great idea too, I hope we can have a room or channel to talk our own languages.
Click to expand...

Liam said:
Players will be sorted into chat rooms of their own language (and are free to move into whatever rooms they would like to, such as English)
Click to expand...

i'm so excited for the new update!!
i'm a very defensive player so i'm happy to see players like me will be able to set the kind of team they like playing with (and get points for a good defensive team!)

This is all amazing, but when will we get the remaining Skullgirls fighters, which are Squiggly, Ms Fortune and Robo-Fortune?

Kassem Shour said:
This is all amazing, but when will we get the remaining Skullgirls fighters, which are Squiggly, Ms Fortune and Robo-Fortune?
Click to expand...