The only Cerebella combo you'll need

this is why they'll limit one move per combo

Midnighte said:
this is why they'll limit one move per combo
Click to expand...

This is why they nerfed Bella's Marquee so it just reduces Meter instead of draining it.
Reactions: Yomady


(Full credit goes to ImaiKari for discovering this "optimal combo")
Click to expand...

THIS GAME IS BROKEN

Himesuler said:
THIS GAME IS BROKEN

As many of you know, there have been a number of sneaky infinite combos that have existed for quite some time that use multiple Blockbusters or Special Moves in combination with increased cooldown reduction, or increased meter gain. As we work on our new 1v1 async competitive mode (mentioned in our last update notes) and continue to build towards future Sync PvP, we want to make sure that clear exploits like this which prevent the opponent from ever playing again are kept to a minimum (if not eliminated entirely).

As such, in 2.6, you cannot use a Move in the same combo that it was activated in. Once the combo is finished, you can use the SM/BB again, but otherwise - even if the SM cooldown is complete or the BB is at full meter - it will remain grayed out until the combo counter fully vanishes. This rule also applies for the opponent.

Note that you can use the same Special Move multiple times in one combo, as long as you equip it more than once. Ex: Two "Drag 'n Bite" Special Moves on Squigly, or two Napalm Shot special moves on Parasoul. Each Move tracks its own usage separately. 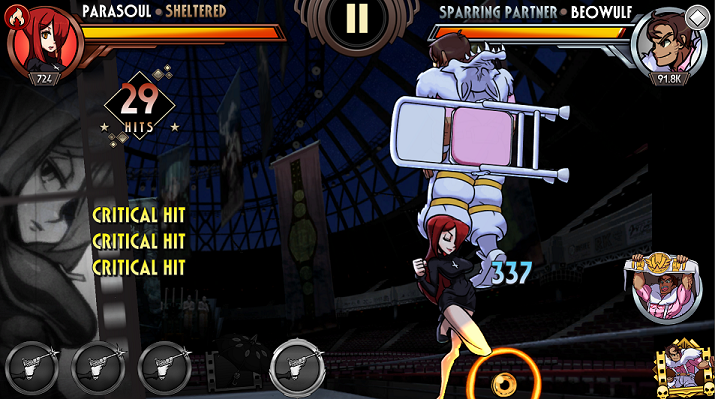 While this may impact a handful of combos that some players have been using, for most players the impact of this should be minimal. We think this change will keep combos as fun and flexible as possible while removing the parts that are exploited
Click to expand...