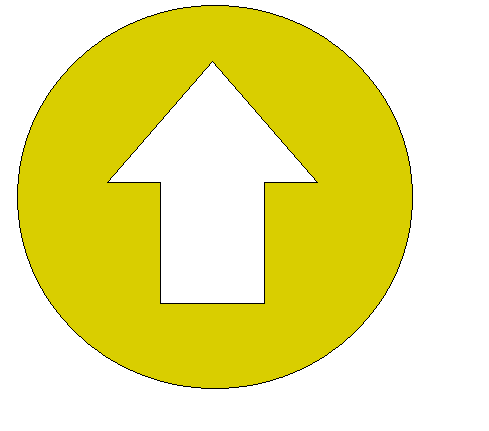 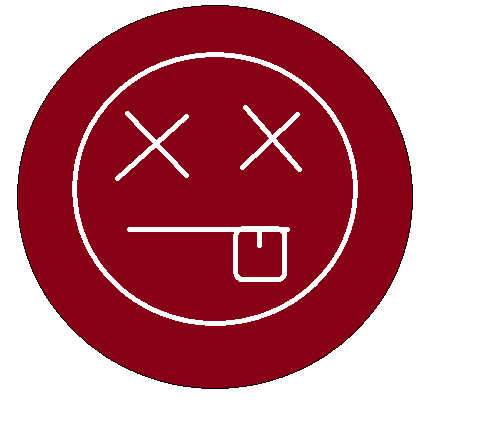 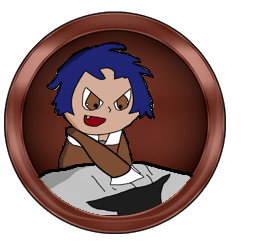 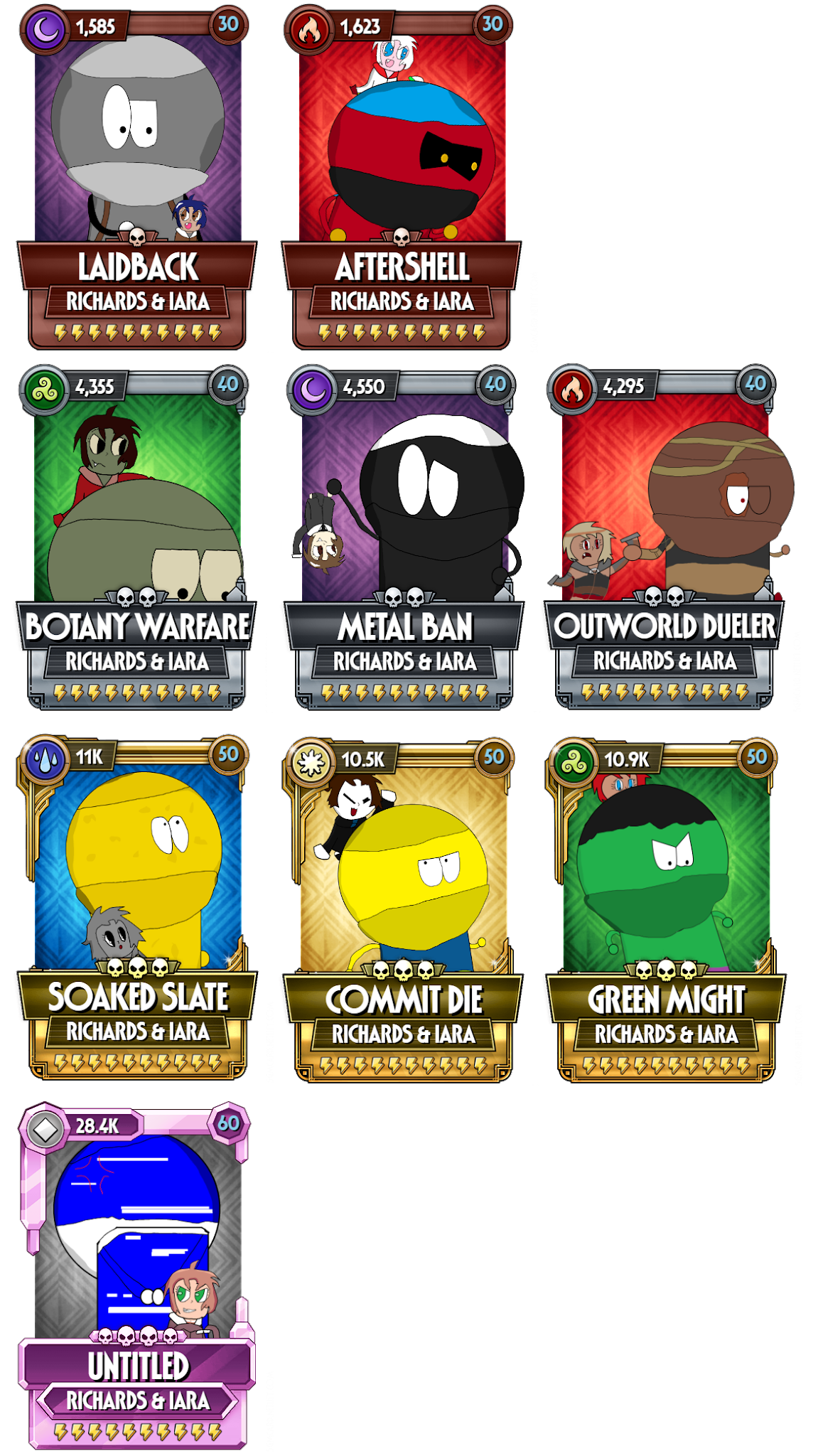 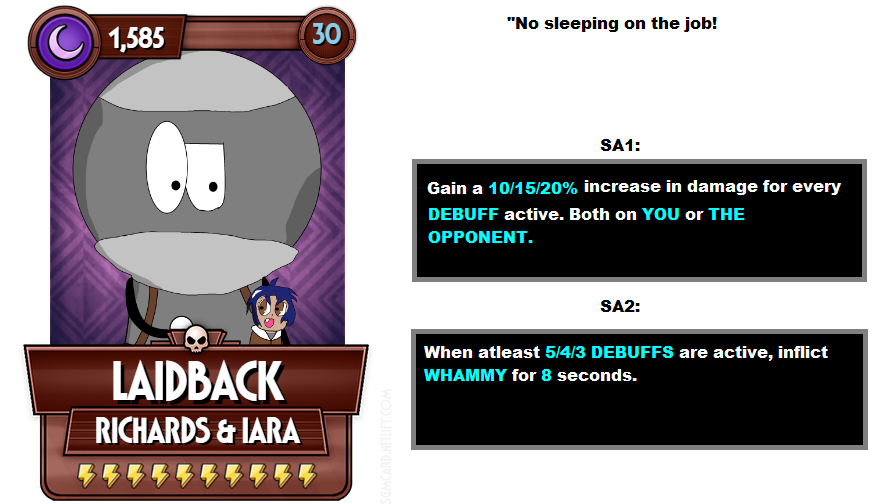 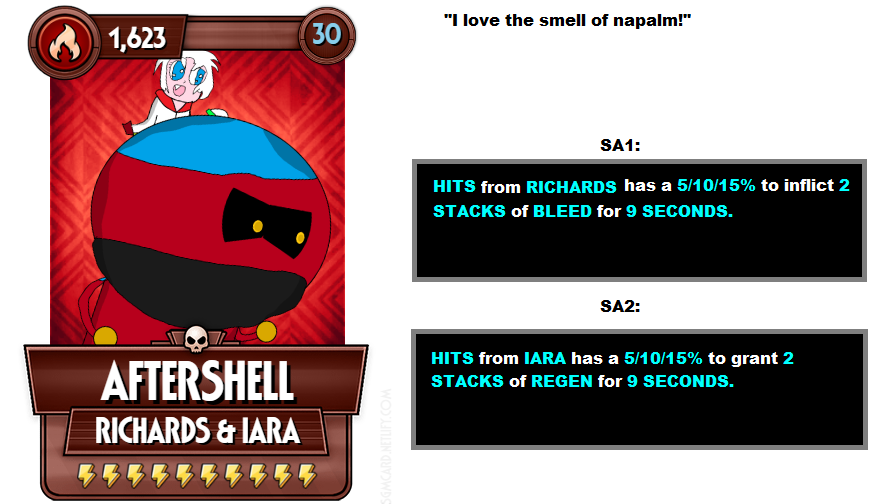 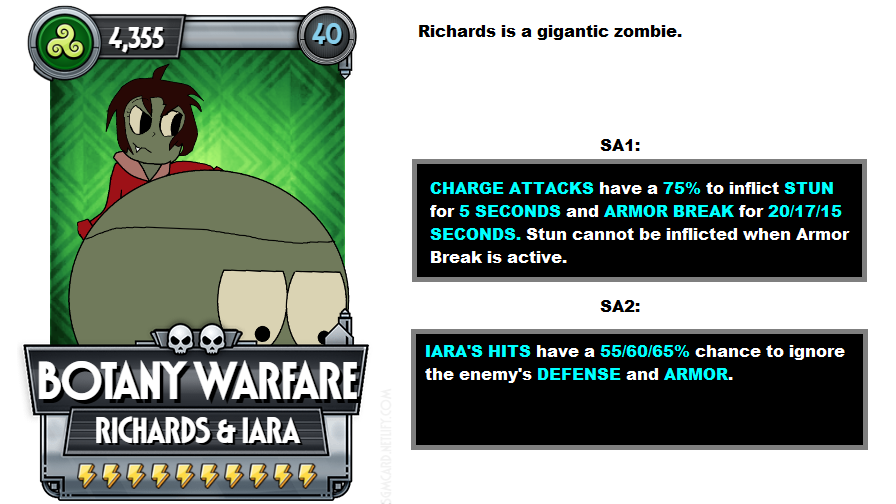 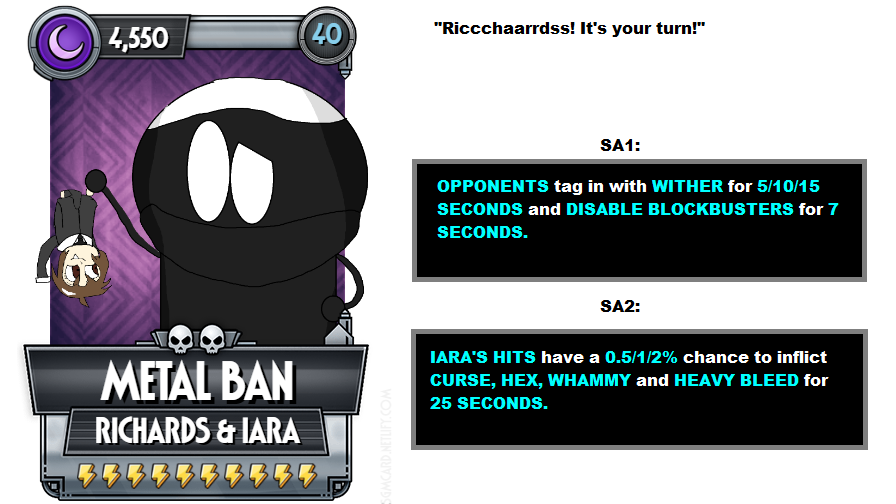 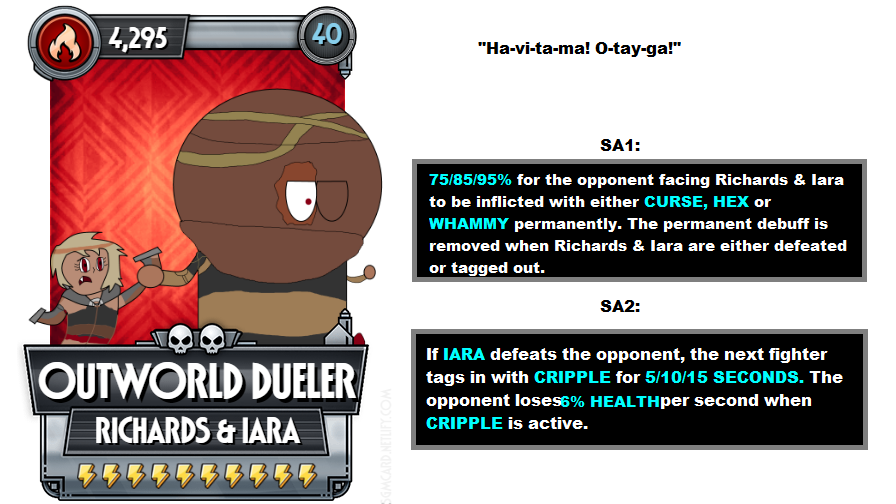 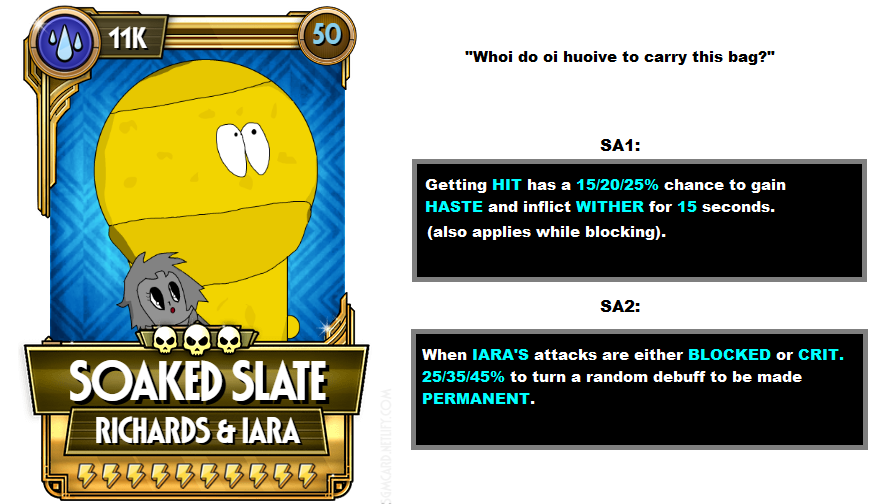 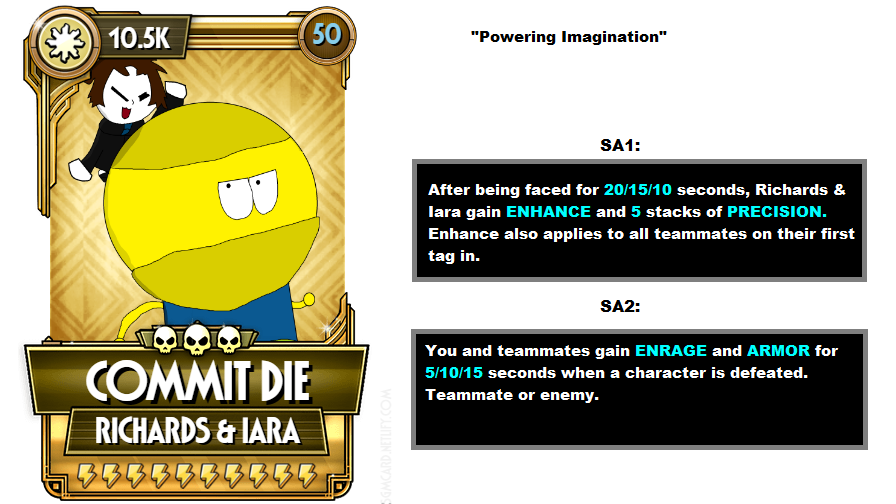 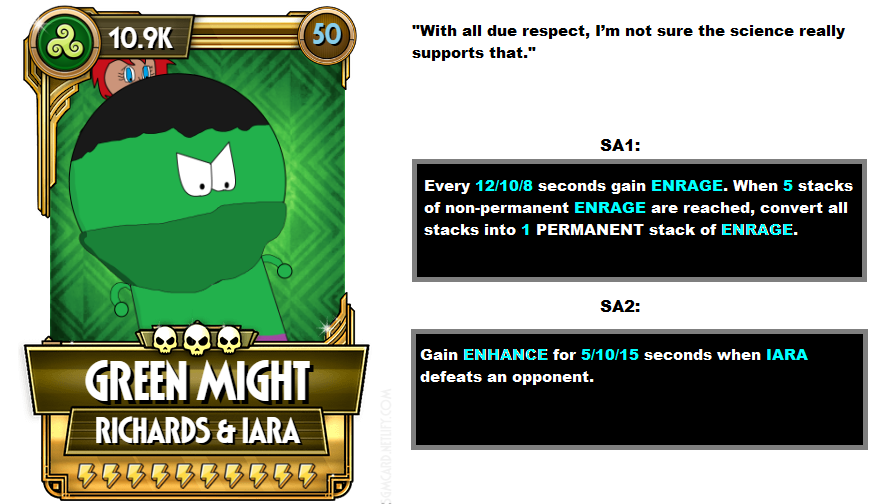 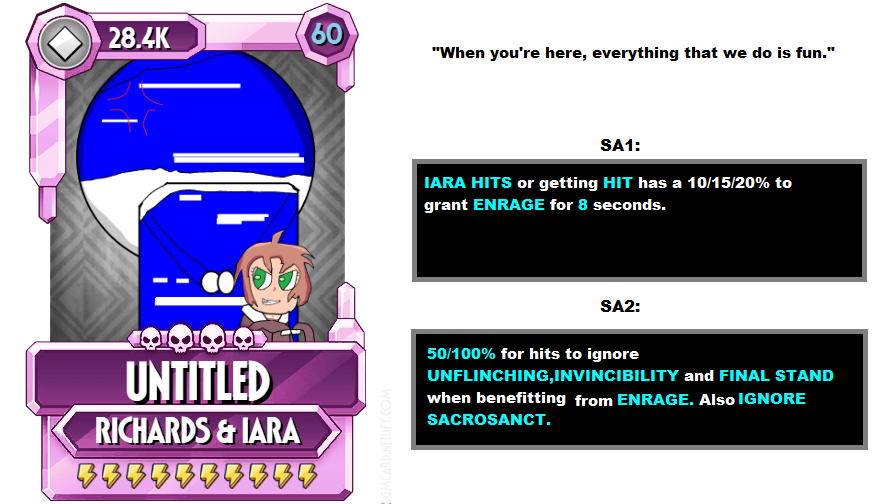 Deal breaker:Based on cuphead.Wish there was a better colour for the hair.
Reactions: Peacock229, Kassem Shour and BallotBoxer

SA1: Gains a random (unstackable) buff every 10/7/5 seconds, all buffs are removed when hit (not including blocked hits) or knocked down. Also has 50% chance of converting debuffs on self into regen or permanent immunity
SA2: Twice per fight when defeated without surviving teammates, resurrect with 10/15/20% health, and inflict permanent curse and wither on the enemy team
Last edited: Aug 12, 2019
Reactions: Peacock229, Luxanna, Kassem Shour and 1 other person

It's time for more fighter cards!

Try and guess who's referencing what!

GANG STAR - " Did you really think you'd be that lucky? "

Gold Experience
SA1 - When defeating an opponent, gain 2 stacks of REGEN
SA2 - Once per match when suffering a hit that would be fatal, REVIVE with 30% HP

CASTLE CRUSHER - " Sorry, your princess is in another castle "

HELL PRINCESS - " Inside every demon is a rainbow! " 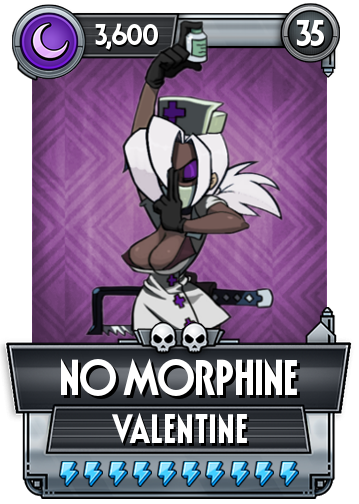 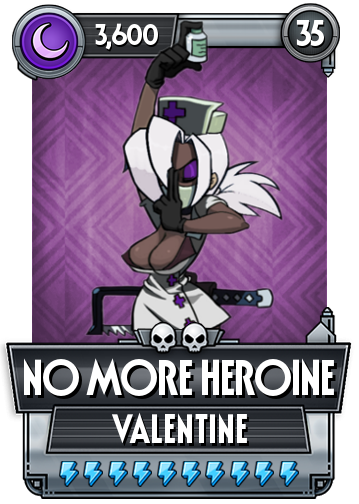 Well, I've messed around with the palette editor for a little bit, and I've made some pretty decent looking cards. I had a lot of fun making these, so I hope you guys like them too!
"I'm the main man around here!" - Lobo (DC Comics)

"It seems that your contract has expired.." - The Snatcher (A Hat In Time)

"Get down with the sickness!" - Mikan Tsumiki (Danganronpa)

This isn't all of the cards that I made, but I wanted to keep it simple and short for now. Enjoy!
Reactions: maxiefrommars, Luxanna, Kassem Shour and 3 others

How about No More Heroine as the name, and her quote is "It's Mighty Morphine Time!"
Reactions: RoseNasty

fanghoul said:
How about No More Heroine as the name, and her quote is "It's Mighty Morphine Time!"
Click to expand...

I'll definitely go with that. Thanks a lot!
Reactions: fanghoul

Here's my own share of custom cards. I made one for every character, but I chose the ones I like the most. The rest are posted on the SGM subreddit.

SIGNATURE ABILITY: CAN'T LAY A FINGER ON ME!

1) 10% chance when blocking a hit, gain five stacks of Throns for 5/7/10 seconds
2) Blockbuster hits remove one Thorns stack and remove 3/4/5% of the opponent's Health bar

1) Deal an additional 1/2/3% damage for every combo hit
2) Using a Special Move or a Blockbuster inflicts Heavy Bleed and Wither for 5/7/10 seconds.

"We will become a flaming arrow and crash into your base!" (Kuwagust Anchus, Mega Man Zero 2 (also current pfp here))

1) Dash attacks deal an additional 100/150/200% damage and inflict Armor Break and Death Mark for 10 seconds
2) 5% chance when dealing more than 5% damage to inflict Stun for 2/3/4 seconds
Reactions: Kassem Shour, molly, BallotBoxer and 2 others

As said by Bryan on the previous page, and it can't be said enough, krazete's palette editor (https://sgmpalette.netlify.com) is amazing! Makes it easy to realize dreams like this, everyone's favorite Dagonian waitress:

Catfish Ms. Fortune
(based on Minette)
Signature Ability Order Up!
1. Grabs have 25/50/75% chance to steal buffs from opponent. Also takes debuffs from enemy and converts them to buffs.
2. Always tags-in with 5 stacks of Evasion
Reactions: Peacock229, Art3mes, Luxanna and 12 others

"Get a load of this!"
Signature Ability: Chaotic Upgrade
Phew, here's my sonic inspired palettes, hope you like it!
Last edited: Aug 15, 2019
Reactions: Kassem Shour, Whispy and Kevin Pepino

Gaming Master - "Why have 9 lives, IF I CAN GET INFINITE LIVES!" (referencing the infinite 1up trick)

Glitchy Ghoul
SA1 - When landing a Blockbuster, gain 10 stacks of EVADE.
SA2 - At random inflict GLITCH to the opponent for 20 seconds.

Greetings fellows, I've came back with some more palettes! I've also decided this time I'd come up with some SAs for them this time around, and as before, I hope you enjoy!
"Die, monster! You don't belong in this world!" - Richter Belmont (Castlevania)
SA: Whip It!
SA1: Gain one stack of enrage every 1.5/1/0.5 seconds while using Wyrm's Tail. One stack of enrage goes away per hit.
SA2: While you have 4/3/2 stacks of enrage, Leviathan hits apply Armor Break and Hex for 10 seconds.

"Breakdown, breakdown!" - Yoshikage Kira (JoJo's Bizarre Adventure)
SA: Great Daze
SA1: If an opponent is defeated with a projectile, they have a 50/75/100% chance to self destruct (similar to Circuit Breaker/Blue Screen) when an opponent is near their body.
SA2: When an opponent is resurrected, add 30/45/60 more seconds to the clock.

"Another successful procedure!" - Medic (Team Fortress 2)
SA: Charged Up
SA1: Get Haste for 5/7/10 seconds upon using a special move or blockbuster.
SA2: If an unblockable blockbuster is fully charged, tagging into a teammate will give them invincible and final stand for 5/10/15 seconds.

"You know what they say, the more the merrier!" - Dr Eggman (Sonic)
SA: Reassembly
SA1: 25/50/100% chance upon a teammate getting defeated to get 1 permament stack of enrage and regen.
SA2: Using a blockbuster gives you 1/2/3 stacks of barrier. Using an unblockable resurrects one random teammate.

Alright, that's what I got for now! I'll upload some more palettes and SAs in a couple of days. Sorry if it was a little much, I'm just really excited to show off some of these palettes!
Reactions: Kassem Shour, Veeko, BallotBoxer and 1 other person
You must log in or register to reply here.
Share:
Facebook Twitter Reddit Pinterest Tumblr WhatsApp Email Share Link
Top Bottom